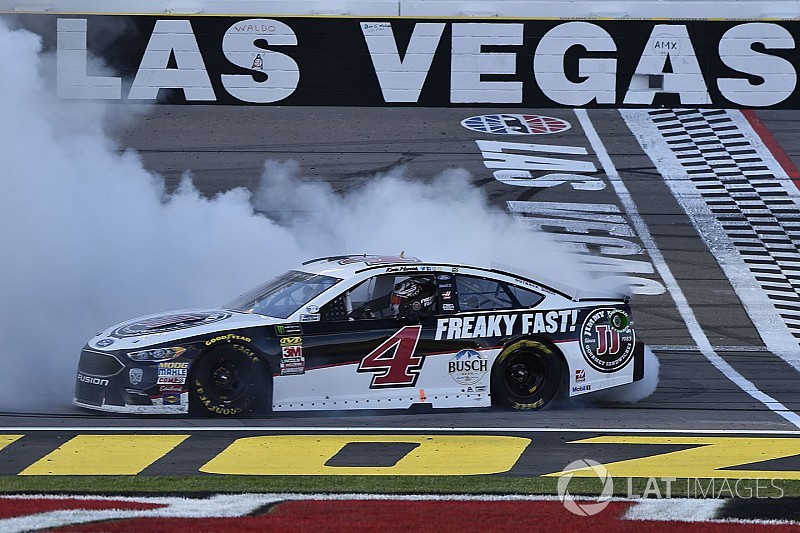 Kevin Harvick’s dominating performance of the last two weeks has raised the question – among himself and his competitors – whether he could be on his way to repeat of his 2014 season.

In fact, early signs indicate it could well be better.

Harvick won five races and his only series championship in 2014, with a dominance that included eight poles and more than 2,100 laps led (the second-most of his career).

There was hardly a practice session or race that went by when Harvick’s No. 4 Stewart-Haas Racing team wasn’t at or near the top of the leaderboard. Even more impressive was the fact it was Harvick and crew chief Rodney Childers’ first season together at SHR.

“To me, so far, it feels a lot like 2014 except you’ve got a team with five years of experience,” Harvick said following his win Sunday at Las Vegas Motor Speedway.

It certainly should be for the rest of the Monster Energy NASCAR Cup Series field.

While Harvick got off to a good start in 2014, it was not near as eye-opening as his back-to-back wins at Atlanta and Las Vegas this season.

In the last two races alone, he’s led a combined 395 laps and won three of the four stages. Sunday at Las Vegas there times it looked like he was toying with the field.

Harvick ended up winning by nearly 3 seconds over Kyle Busch, no slouch in his own right. And he’s already matched his win total from all of last season.

While Harvick may be in the later stage of his NASCAR career, he remains the most competitive he’s ever been.

SHR’s transition from the Chevrolet to Ford camp between the 2016 and 2017 seasons required an enormous amount of work and it showed as Harvick and his teammates got off to a slow start last year.

While the Toyotas and especially Martin Truex Jr. dominated much of the season, Harvick and his No. 4 Ford team showed glimpses of what was to come ending the year with four consecutive finishes of fifth or better, including a victory at Texas.

Truex went on to win his first series championship at Homestead but Harvick was in the fight to the end.

An off-season without dramatic change was a welcome respite for the No. 4 team.

“I think as you come into this year, you’re working on the small nuances of a new inspection process and different things that come with that and whatever the little rule changes were, the pit road stuff,” Harvick said.

Not letting up and keeping the eye on the prize.

“We’ve been in this position before, and you have to keep pushing forward to try to keep your advantage of things that are working well for you, but you also have to find out what your weaknesses are,” Harvick said.

In fact, it could even get better.

Aric Almirola on strong start: "We're going to be in contention"

Paul Menard and the Wood Brothers already finding success together