There were times this season when Kyle Busch seemed frustrated and even puzzled why he couldn’t seem to match his Joe Gibbs Racing teammates’ performance on intermediate tracks with its new aero package. 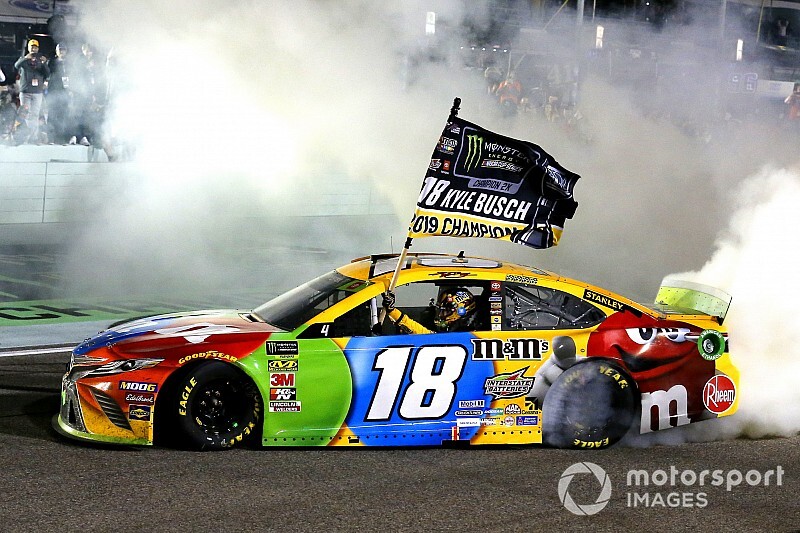 Of his four victories before entering the NASCAR Cup Series playoffs, only one – Auto Club Speedway – came on track that featured all aspects of the new package.

As the season went on, Denny Hamlin and Martin Truex Jr. each won twice on intermediate tracks and both won in the playoffs. Busch’s most recent victory came in June at Pocono Raceway.

With that uncertainty, did Kyle Busch really believe he had a chance to top his teammates and Kevin Harvick Sunday for the championship at Homestead-Miami Speedway?

And more importantly, do it by winning the race itself?

Busch’s crew chief, Adam Stevens, said he had never doubted Busch’s ability if his No. 18 Toyota team did its job.

“Kyle has never wavered on the fact that when we put the car in the truck that we have what we need to win. And that’s what makes it frustrating, because as a company we are winning races and as a team we are elite and we do prepare to win, and we do execute to win.

“Unless you win every single race, you left something on the table because we have the tools at our disposal to go out and win on any given weekend.”

Ending winless streak with a championship

Busch showed that Sunday, winning Stage 2, leading 120 of the 267 laps and winning the race by nearly five seconds over Truex.

Stevens recalled the year-long winless streak Busch and his team battled through in parts of the 2016 and 2017 seasons.

“That’s the way it is in professional sports. You have to keep your eyes on the prize and establish what the goals are and keep your nose to the grindstone and get after it.”

Because of Busch’s winless streak late in the season, it was easy for the No. 18 team to be assigned the ‘underdog’ role.

Stevens insists he never felt like an underdog, but certainly wouldn’t have minded coming into Homestead on a winning streak rather than a winless one.

“I saw some stuff out of the team that told me that we were really getting our ducks in a row and that we were performing at a high level, and I knew the guys were hungry,” he said. “I knew Kyle was hungry, and I knew that we could have a mistake-free weekend, and that was going to be what it took.”

And it was exactly what he got.

Jimmie Johnson to retire from full-time competition after 2020