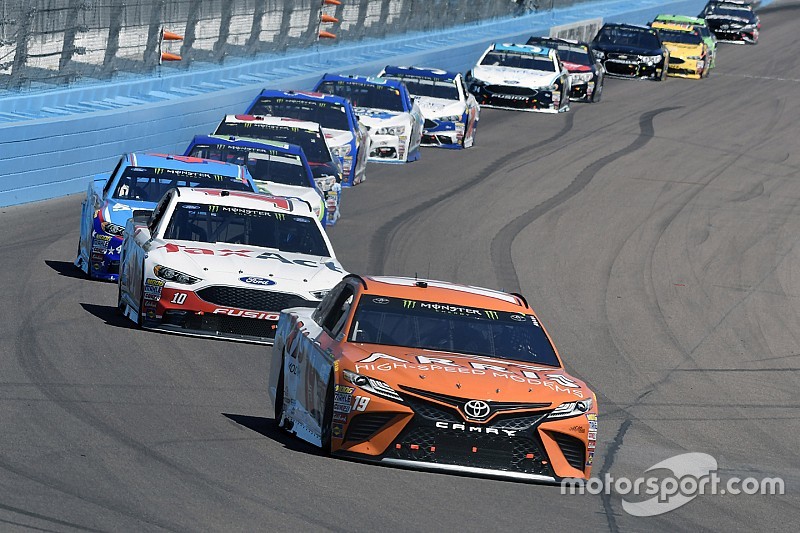 Daniel Suarez enjoyed a few extra days in the Arizona desert before competing in the final leg of NASCAR’s West Coast Swing at Auto Club Speedway this weekend.

Suarez, who has endured a whirlwind transition from Xfinity Series champion to Monster Energy Cup rookie contender, scored a season-high seventh-place finish at Phoenix Raceway on Sunday, after starting 27th.

Hopefully, we can build on our first Top 10 finish of the season from last week

The result could be just the spark the No. 19 Joe Gibbs Racing team needs to catch fire.

“The guys did an amazing job,” Suarez said. “They just did exactly what they had to do. A fast pit stop, two tires and the car was almost as good as four tires.”

The fast pit stop and two-tire call by crew chief Dave Rogers followed the final caution of the race, necessitated when the bead melted on Joey Logano's right front tire. After the tire exploded with a boom that echoed around the track like a howitzer blast, Suarez pitted for two tires and came out 12th.

“It’s a big deal because in the last two races we have struggled,” said Suarez, who finished 21st at Atlanta Motor Speedway and 20th at Las Vegas Motor Speedway. “We didn’t have the speed and the communication wasn’t great, but we’ve been working very hard trying to work on chemistry, communication and for sure we’ve been getting better.

“(Saturday) in the last practice, in Happy Hour, I felt very good about the car. I feel like we were going to have a shot to have some fun in the race and I wasn’t wrong. The team did a very good job.”

This weekend, Suarez will take the next step in assuming the identity of the No. 19 car when Subway debuts its new paint scheme in Fontana — the first of four races in 2017 for the sponsor. Suarez will unveil the new livery on SportsCenter from ESPN’s L.A. studio on Wednesday.

On Thursday, Suarez will participate in Motorsports Day activities at Toyota’s Southern California base. In the afternoon, he’ll tour Jay Leno’s Garage before heading to Auto Club Speedway, where he won the pole for last year’s Xfinity Series race and finished fourth.

“I’m really looking forward to getting to Auto Club Speedway this weekend and finishing our trip out west on a high note,” Suarez said. “I really enjoy this track; it’s definitely a racers racetrack and one that’s really fun to drive. We’ve got Subway on board this weekend, and are also debuting a really cool looking paint scheme that I think everyone will really enjoy, as well as a new national TV commercial that everyone will see during the race on Sunday.

“I’m so proud of this team and all of the hard work everyone has put into starting this season. Hopefully, we can build on our first Top 10 finish of the season from last week, and have another good race on Sunday before loading up and heading back home.”