Alex Bowman may be losing a sponsor this season but he gained something even better – his first Monster Energy NASCAR Cup Series victory. 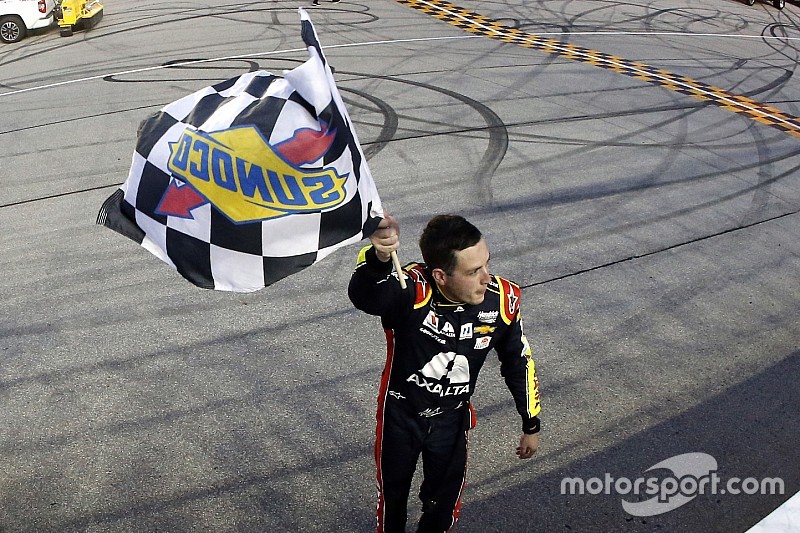 Bowman earned his first Cup Series victory in 134 starts by holding off a wild challenge from Kyle Larson in Sunday’s Camping World 400 at Chicagoland Speedway.

Larson actually was able to run down Bowman to take the lead with eight of 267 laps remaining, only to see Bowman run him back down and reclaim it three laps later.

"This is what I wanted my whole life," Bowman said. "I feel this is validation for a lot of people who said we couldn't do this. I'm so proud of everybody at Hendrick Motorsports. My guys have worked so hard. I had questions if (Rick Hendrick, team owner) was going to let me keep doing this and everything that was in the rumor mill.

"To be here, winning a race in the Cup series means so much. I couldn't do it without these guys, My pit crew is the best pit crew on pit road. This is all I've ever wanted."

Asked he he regrouped and passed Larson for the win for the final time, Bowman said, "I was just tired of running second. I don't want to do that anymore.

"I feel like this is the last box aside from going and chasing a championship that I personally for myself needed to validate my career. I feel like there is a lot more left to accomplish, but this has always been what I hear: 'You haven't won a race.'

"Everybody can stop giving me crap - we finally did it!"

Earlier this month, Hendrick Motorsports announced one of Bowman’s primary sponsors, Nationwide, would be leaving the No. 88 team at the end of the season.

Following the break between Stages 2 and 3, all of the lead-lap cars elected to pit with Kevin Harvick the first off pit road. On the restart on Lap 168, Harvick led the way followed by Larson, Bowman and Johnson.

Denny Hamlin was penalized for having too many crew members over the wall during his pit stop and had to restart from the rear of the field.

Larson powered past Harvick on the restart to take the lead for the first time in the race as Harvick dropped to second and Bowman ran third.

Kyle Busch was forced to pit on Lap 169 after contact with Logano on the track left him with a flat tire.

On Lap 171, Bowman got by Harvick and Larson to move into the lead for the first time in the race.

Harvick pancaked the wall on Lap 172 to bring out a caution. Several drivers elected to pit but Bowman and many others remained on the track. On the restart on Lap 177, Bowman led followed by Larson, Johnson, Aric Almirola and Martin Truex Jr.

On Lap 186, Clint Bowyer took his No. 14 Ford to the garage for repairs. He experienced several tire issues during the race.

With 75 laps remaining in the race, Bowman had moved out to a 1.4-second lead over Johnson with Larson running in third. Logano was fourth and William Byron fifth.

After 107 laps, Bowman had opened the biggest lead of the race – just over three seconds – on Larson as Johnson moved to third.

With 50 laps to go, Ryan Newman and Logano were the first to drop to pit road for their final pit stop of the race. Larson and Truex followed with 149 laps left. Bowman made his stop on Lap 220.

Once the cycle of stops were completed with 42 seconds to go, Bowman remained out front with a lead of just over two seconds on Larson. Logano was third, Johnson fourth and Brad Keselowski fifth.

With 34 laps to go, Kyle Busch reported smoke in the cockpit of his No. 18 Toyota and he was forced to pit under green shortly thereafter.

With 20 laps left in the race, Bowman maintained a lead of just over 1.5 seconds over Larson while Logano remained in third.

Bowman’s lead over Larson dropped to under a second with 15 laps remaining.

Larson got to Bowman’s rear bumper with 10 laps remaining and began working on trying to pass him for the lead.

With eight laps remaining, Larson powered to the inside of Bowman entering Turn 1 and came out in Turn 2 with the lead. Three laps later, Bowman got back around Larson to reclaim the lead.