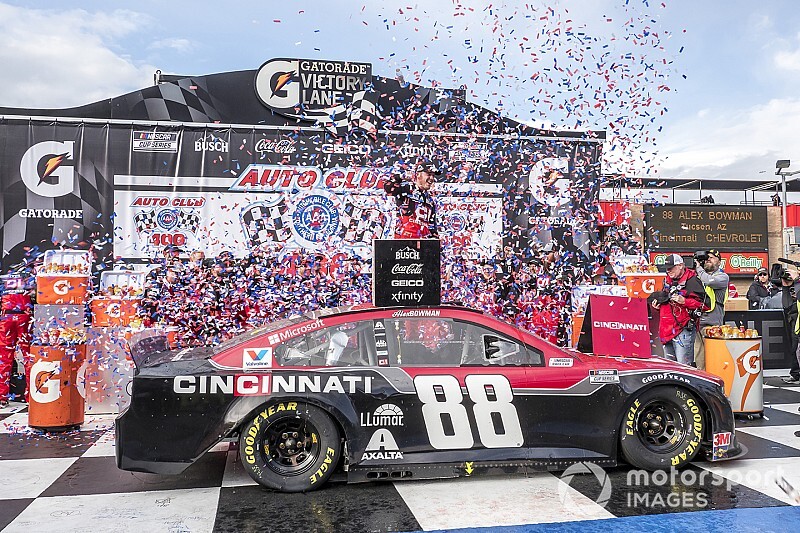 Alex Bowman had a near-victory slip away last weekend at Las Vegas but had no such problems Sunday at Auto Club Speedway.

Bowman dominated much of Sunday’s Auto Club 400, leading 110 of the 200 laps and easily held off Kyle Busch by nearly nine seconds to claim his second career NASCAR Cup Series victory and first of the 2020 season.

Bowman was in position to make a pass for the lead late in last weekend’s race at Las Vegas only to see a late caution shake up the final results.

There was no such drama on Sunday.

Bowman emerged with a 3-second lead over Ryan Blaney after a final round of green-flag pit stops and his advantage only grew from there. Blaney eventually had to pit with three laps left because a tire that was cording.

Kurt Busch ended up third, Chase Elliott was fourth and Brad Keselowski completed the top-five. Blaney ended up with a 19th-place finish.

"How about that, California? I grew up quarter-midget racing maybe 20 minutes from here in Pomona Valley. Went there every week, met a lot of great friends and I know a lot of you guys were here," Bowman said. "I promised by buddy Aaron that we would get matching '88' tattoos if I won and I think I have to go get a tattoo now, but that will be a good time.

"It's been a lot of fun. Thanks to Greg (Ives, crew chief) and all the guys. He made great (pit) calls all day. We were up front when it counted."

Asked about his second career win coming in dominating fashion, Bowman said, "The first one, it was a really enjoyable experience and then we sucked for six months. We started this year so strong. I feel like I have a lot on my side that is much better. My life is a lot more organized than it was back then. Greg and all the guys are just on point.

"We've unloaded the last two weeks - I don't think we've had to make a change in the race car from how it came off the truck. That makes my job a heck of a lot easier. I'm just so proud of this team. We put a lot of effort into this new car and it's obviously worked out really well."

Following the break between Stages 2 and 3, all the lead-lap cars pit with Jimmie Johnson the first off pit road. He led the way on the restart on Lap 128. He was followed by Bowman and Blaney.

Bowman, with a push from Blaney, grabbed the lead on the restart. One lap later, Martin Truex Jr. powered to the front after taking the field 4-wide for the lead.

On Lap 133, Bowman got around Truex to move back into the lead.

Hamlin appeared to tag the wall on Lap 141 while running to the outside of Blaney off Turn 2 but he remained on the track.

With 50 laps remaining, Bowman’s lead had grown to more than 3.4-seconds over Truex as Blaney ran third. Johnson was fourth and Kyle Busch completed the top-five.

On Lap 160, Elliott and Johnson were among the first drivers to hit pit road for their final green-flag pit stop of the race, getting new tires and fuel to make it to the finish of the race.

Truex’s team had trouble getting the lug nuts off his left-rear tire, which left him with a slow stop and dropped him back in the field. Truex’s rear tire carrier appeared to suffer an injury and was taken to the track’s infield care center.

Once the cycle of stops was complete on Lap 167, Bowman remained in the lead and with a more than 3-second lead over Blaney.

With 20 laps remaining, Bowman had stretched his lead over Blaney to more than 5.5-seconds as Kyle Busch continued to run third. Kurt Busch was fourth and Elliott fifth.

On Lap 194, Blaney reported a vibration as he was running second and he began losing more time to Bowman. Blaney was forced to pit to address the issue with three laps remaining.

Blaney held off Bowman without much problem to take the Stage 2 victory.

Johnson was third, Keselowski fourth and Truex completed the top-five.

Following the break between Stages 1 and 2, the lead-lap cars all pit with Kurt Busch the first off pit road but he apparently missed his pit box.

Johnson was the next car off pit road and took over the lead when the race returned to green on Lap 67. He was followed by Blaney and Bowman.

On Lap 69, Blaney got a push from Bowman and went to the inside of Johnson to take the lead for the first time.

With 40 laps to go in the stage, Blaney held a small but steady lead over Johnson as Bowman ran third.

On Lap 83, Christopher Bell had to take his No. 95 Toyota to the garage after it appeared his engine dropped a cylinder.

On Lap 90, another round of green-flag stops began as drivers came to pit road for fuel and tires to make it to the end of the second stage.

In the middle of stops on Lap 92, Clint Bowyer spun off Turn 2 shortly after pitting with what appeared to be a flat left-front tire. “Killed the splitter,” Bowyer said over his team radio.

Blaney had already cycled back as the leader before the caution and remained out front when the race returned to green on Lap 96. He was followed by Bowman and Johnson.

With 10 laps remaining in the stage, Blaney maintained a small lead over Bowman. Johnson was third followed by Truex and Keselowski.

Blaney’s lead over Bowman had expanded to more than 2.5 seconds with five laps to go.

Bowman cruised to the Stage 1 victory, easily holding off Blaney following a round of green-flag pit stops.

Bowyer, who started on the pole, led the first 10 laps until Bowman and Johnson both got around him off Turn 4, dropping Bowyer to third.

After 20 laps, Bowman had opened up a more than 1.3-second lead over Johnson as Blaney continued to run in third.

On Lap 27, Truex and Jones were among the first cars to make a green-flag pit stop for fuel and new tires to make it to the end of Stage 1.

On Lap 34, Kyle Larson got into the wall pretty hard after contact with Denny Hamlin, which forced him to make a second green-flag pit stop for repairs. He returned to the race two laps down and in 36th.

Once the cycle of stops was completed on Lap 37, Bowman returned to the lead, with a more than 2-second advantage over Blaney.

On Lap 46, Bell pit under green after reporting a vibration in his car.

With 10 laps remaining in the first stage, Bowman maintained a nearly 3-second lead over Blaney with Johnson running third.

Both Ricky Stenhouse Jr. and Ryan Preece had to start the race from the rear of the field due to their teams receiving an L1 penalty for infractions found following Saturday’s qualifying.

Hamlin pulled down pit road before the race began to change a shock absorber. He also had to start the race from the rear of the field.

Kyle Busch: "We have a lot of work to do" despite second-place