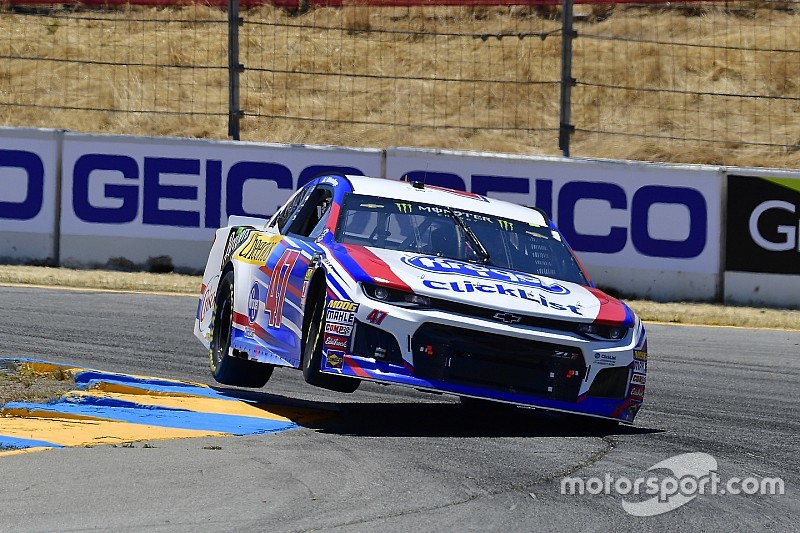 A.J. Allmendinger is in a precarious position.

He currently sits 23rd in the standings, over 100 points back of the cut-off. With the playoffs looming, there are just five races remaining before the regular season ends.

With Kevin Harvick, Kyle Busch and Martin Truex Jr. ruling the 2018 season, opportunities to win are scarce for drivers further down in the field.

But this weekend, Allmendinger has an edge over the competition. He is one of the best road course racers in the sport today. In fact, his lone Cup win came at Watkins Glen International in 2014 after a thrilling door-to-door battle with two-time Virgin Australia Supercars champion Marcos Ambrose.

He's in a must-win situation at Watkins Glen, but the mistake that cost him an opportunity to win at Sonoma still weighs heavy on his mind.

“I’m not over it yet and it was pretty simple. I missed a shift. That was it. Bad mistake. And something I’ve never really done before. And, yeah, it’s still on my mind, for sure.”

Allmendinger won the opening stage of that race and had a top-three car that he could have potentially won with, but he instead finished last after falling out of the race on Lap 33.

But with Sonoma in the past, another golden opportunity awaits the the 36-year-old on Sunday. Excluding Daniel Suarez who only has one career start the track, Allmendinger boasts the highest average finish at WGI among all active drivers (9.3). He's finished inside the top-ten in six of his nine appearances with three top-fives and the aforementioned victory in 2014.

Taking the fight to the 'Big 3'

But of course, the 'Big 3' are still a major threat with Truex going for his third consecutive road course win and all three drivers have previously won at Watkins Glen.

“In the end, I can just do my best," he said Friday at the track. "I’ve come here and put a lot of pressure on myself. We all know what the ultimate goal is when we show up here. I think over the past couple of years it’s gotten a little bit more difficult. I think the field is spread out more. This year, we’ve seen the three fastest guys are usually the three fastest guys every weekend. It doesn’t matter what track we go to, unfortunately they’re good everywhere. I think there’s more of a difference I can make here as a driver, but I don’t see why it’s not going to be those three again that are going to be the fastest cars. As a whole, in the series, we’ve got to catch up to them.

"So, I just come here and do my best and try to get everything I can out of it. And whatever that holds, I think sometimes people look at it like if we don’t win, it’s a full disappointment of the weekend, but we come here and we run Top 5 all weekend and you get a Top 5 finish, that’s still tough to do and that’s still a good day. So, if there’s a chance to win, we’ll take the chance. And if not, we’ll just get the best that we can and for me, just get everything I can out of the weekend. And if I do that, I can be satisfied with it.”

Although Sunday is the big prize, Allmendinger will have two chances to win this weekend. For the first time since 2013, he will be running an Xfinity Series race. He'll be behind the wheel of the No. 23 GMS Racing Chevrolet, marking the first race weekend where he's pulled double duty since November, 2008 at ISM Raceway.

“I don’t think it makes a huge deal," he said of the added track time. "But there is stuff that we could possibly try on set-up that may help on the Cup side of it. But, it never hurts to run more laps around a race track. It will be the first time I’ve don’t a double-duty race in 10 years, so that’ll be a little bit to get used to running back & forth on Saturday, especially. But, it’s just racing. I just want to race; especially at a road course. So, if there’s an opportunity to do it, whether it’s going to help me a lot or a little of if any, it’s a chance to go out there and run up front and possibly win a race.”