Almirola cut out of car after massive crash at Kansas 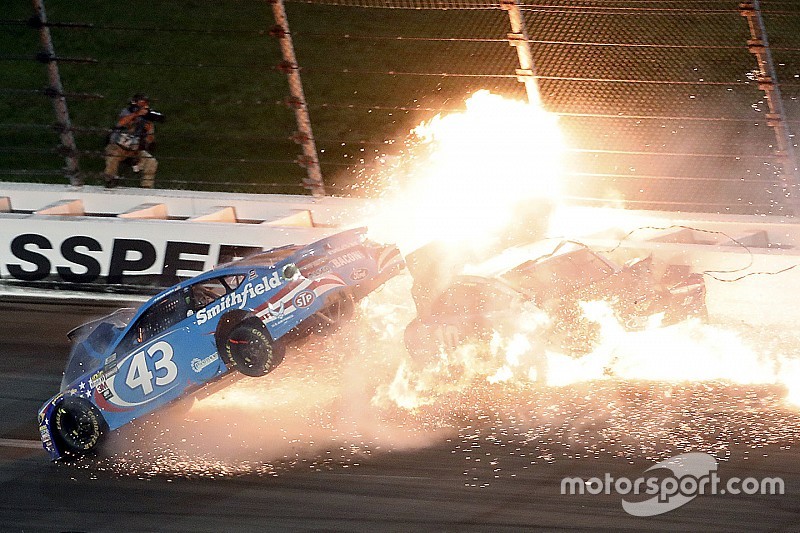 NASCAR waved the red flag after a fireball ignited after contact between Joey Logano, Danica Patrick and Aric Almirola on Saturday night at Kansas Speedway.

Logano had a right front brake rotor break entering Turn 1 on Lap 200 and turned right into Patrick. The two cars exploded into flames and Aric Almirola slid through the oil, then plowed into the melee. (WATCH HERE).

“It broke big whatever it was,” Logano said. “Is Danica ok? She hit a ton.”

"Aric Almirola, driver of the No. 43 Richard Petty Motorsports Ford, was involved in a multi-car accident on Lap 199 during Saturday night’s race.

"Almirola was alert after the accident as safety professionals removed him from the car. He was transported by helicopter to a local medical facility for evaluation. He is in stable condition and will be held overnight for further observation.

Logano and Patrick were battling for 12th-place prior to the wreck.

"I just don't understand why so much bad luck happens," said a frustrated Patrick. "Besides that, I actually feel physically fine and I was over there showing the doctor that my sprained ankle was just fine. What can I do but just laugh about it? A (brake) rotor? On a track that we're braking with 200 pounds, 300 pounds of brake pressure? Why? What else can I say?

"On the other hand I was having a really good night and that's what makes me the most mad. Every time I'm doing better, something stupid happens and it's just killing me. I don't know any other way to say it. I kind of felt like Wonder Woman tonight for a little while. It definitely looked like running in the top 10 for a while.

"I got out of the car and walked in that direction and I was careful not to walk toward the track because I've been fined for that before. When I saw (Joey), I said 'I'm pretty sure it was you' and then he said it was a failure of some sort which didn't really make me feel any better at that moment.

"Well, I hope Aric is OK. He is definitely feels the worse of everybody. NASCAR does everything it can to make our cars as safe as possible but things happen and his car looked the most damaged of everybody. One of these times these accidents isn't going to go well for me. I've been very fortunate but one of these times it won't go well."

Track safety workers cut the roof off of the No. 43 Ford and were able to remove Almirola from the car. Almirola was complaining of back pain following the accident. Almirola has been air-lifted to the University Kansas Medical Center for observation.

Logano and Patrick were treated and released from the Infield Care Center.

"It came out of nowhere. Everything was fine and I just took a hard one. I'm praying for Aric right now. I hate to to be the part that started it but there was nothing I could have done. Something broke and we tore up a lot of cars."