Aric Almirola: "It really is an honor to drive this 41 and the tribute for Maurice."

Sporting the traditional "Petty Blue" paint scheme synonymous with Richard Petty and the No. 43, the current incarnation of the No. 43 Richard Petty Motorsports Ford will honor 2014 NASCAR Hall of Fame inductee Maurice Petty this weekend at Martinsville Speedway.

Only there will be something different about this car, which will be driven by current RPM driver Aric Almirola. Instead of the traditional No. 43, this weekend the No. 41 will be affixed to its doors and roof, as was unveiled at the NASCAR Hall of Fame in Charlotte, N.C., on Tuesday afternoon. 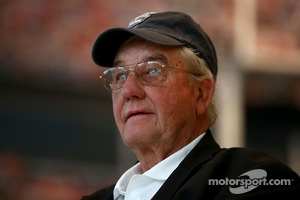 "You might notice that there is a little something different to Aric Almirola's car this weekend. It's the 41," said NASCAR Hall of Fame's Executive Director Winston Kelley upon the car's unveiling. "And Maurice, who we affectionately call 'Chief,' drove the 41, and he drove the 42 as well. But the 41 was Chief's primary number when he was a driver as well."

Maurice drove in 26 NASCAR Sprint Cup Series races over parts of five seasons (1960-64), including nine in the 41 car. During his short driving career, he compiled seven top fives and 16 top 10s.

"I could've raced more, but it was costing more to run me and we were going broke pretty fast so something had to be done. I said 'heck, I'll just build the engines for it,'" Petty said. "But what y'all don't know is Aric, we built engines for him when he was running the Late Model Stock. So, he's been around a little bit, too."

Maurice is the fourth member of the Petty family to be inducted into the NASCAR Hall of Fame, joining his brother Richard (Inaugural Class of 2010), father Lee (Class of 2011) and cousin Dale Inman (Class of 2012).

"This hall of fame has probably got to be the only hall of fame in the world that's got the whole team in [it]," said Richard. "I mean you got daddy, you got Dale, you got me, you got Chief. That is the team. That was the team. So, that's something a little bit different, too."

Maurice will be the first engine builder inducted in the NASCAR Hall of Fame having won the Mechanic of the Year award seven times. The horsepower he supplied to his Petty Enterprises' engines resulted in seven championships and 212 wins.

Although Almirola's regular car number -- the No. 43 -- will not see action this weekend, all points and prize money he collects in the No. 41 will transfer to the No. 43. The Martinsville race will be the first time since Oct. 27, 2003, when Jeff Green failed to qualify for the Atlanta race, that the No. 43 will not be entered in a NASCAR Sprint Cup Series points-paying event. 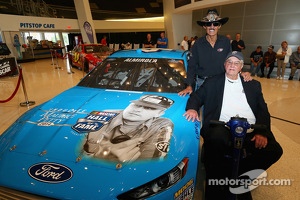 Martinsville Speedway is the perfect venue at which to honor Maurice Petty. Petty Enterprises drivers won 19 times at the .526-mile track with Maurice a part of 18 of those victories.

Ryan Newman; timing is everything at Martinsville

Miller "in the trenches" after poor MotoGP run