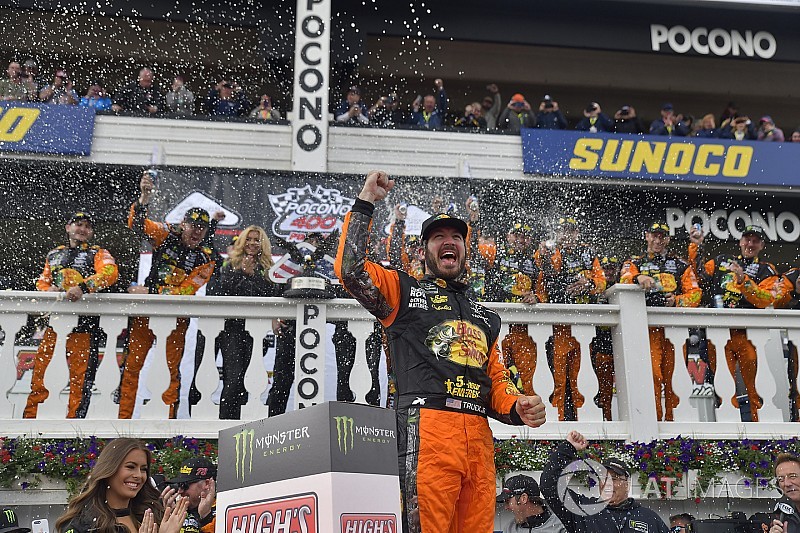 Martin Truex Jr. had won a race this season but Sunday’s victory at Pocono may have cemented his title contender status.

Truex, the reigning Monster Energy NASCAR Cup Series champion, was already in the playoffs and wasn’t exactly having a bad season, just not quite as dominant as the one he enjoyed last year.

Sunday’s victory at Pocono Raceway should serve as a reminder that even if Truex and his crew chief, Cole Pearn, believe they still need to improve, they are more than capable of going toe-to-toe with Kyle Busch and Kevin Harvick and coming out on top.

For a large part of the final stage of the Pocono 400, the race became a battle among this season’s three best teams and through a timely pit strategy call, Truex came out on top.

“I think it was a step in the right direction for us this weekend. We’ve been working really hard and felt good about it this weekend,” Pearn said after the race. “I think you look at the first stage, we were third behind both those guys, and we passed them both to win the stage.

“It showed that the speed was there in our car, and I think all three of us all day were give-and-take, where each of us were on the balance, we were all pretty equal. Obviously, having track position then was good.”

On the next-to-last caution in the race, Truex and Harvick and two others elected to remain on the track while the rest of the field – including former leader Kyle Busch – pit for either two or four new tires.

Busch was the first car with four new tires and lined up eighth on the restart with 17 of 160 laps remaining. In one lap, he gained four positions and looked like he would soon mow down both Harvick and Truex.

Even with another caution and restart, Busch was not able to make up much more ground as Truex fended off a challenge from Kyle Larson before pulling away to the victory.

Truex now has as many wins (two) as he did at this point last year, when he when on to score a career-best eight victories and the championship.

The No. 78 Furniture Row Racing team even picked up a stage win on Sunday, something that came much more frequently last year.

“I would say that I think we had winning speed (Sunday) for sure. It seemed like Stage 1 we passed (Harvick) for the lead, and then we were able to check out,” Truex said.

“Towards the end of the race there, it (Busch) leading, we were second, (Harvick) was third, and we were all just sitting there, couldn’t get any closer to each other, and I felt like whoever was out front at that point was going to be the car to beat.

“We were all so closely matched.”

Harvick (five), Busch (four) and Truex (two) have now combined to win 11 of the season’s first 14 races this season. They are also three of the top four drivers in laps led. The other is Ryan Blaney, but he has yet to earn a victory this season.

Putting an entire race together

Although Truex had to overcome a bad pit stop early in the final stage, much of the weekend appeared to go as planned for Truex and the No. 78 team.

“I felt like this was the first weekend in a while, even though we’ve been finishing good, that everything made sense, everybody – we had kind of a game plan, and everything went the way we thought it would, and it was just a smooth weekend,” Truex said.

“It felt like we were doing all the little things right. So, that’s always a good feeling, and that’s something that we really had last year. We had a lot of confidence in our decisions and making the right adjustments for race day and things like that, and I felt like this weekend we did that.

“So yeah, I feel good about where we’re at, and it was definitely a great weekend and a great way to finish off a weekend.”

Kyle Larson: 'I've been a step behind' Harvick, Busch and Truex