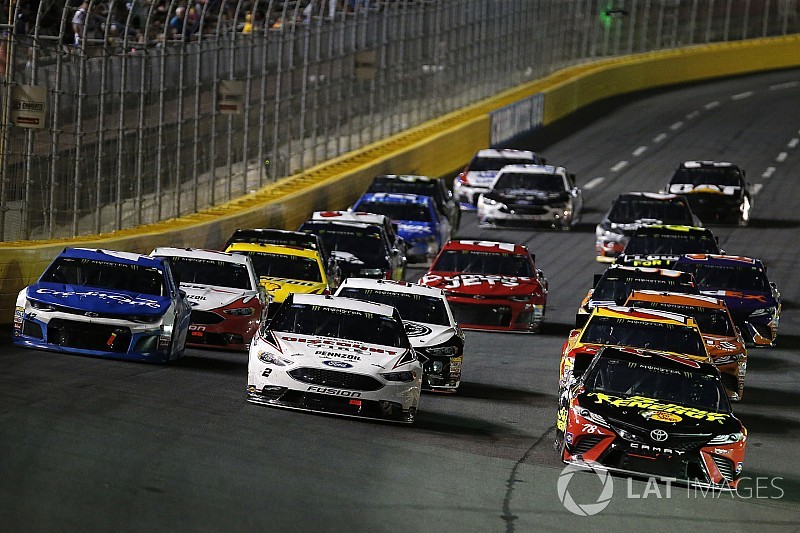 NASCAR is facing a great contradiction but one it must resolve if it’s going to be a lasting and viable option in motorsports.

The problem is finding a common ground that fans, participants, team owners and the sport’s owners can learn to live with.

It won’t be easy, because the issue is a difficult one. It goes to the heart of racing itself.

Is it possible to have fast cars and entertaining racing at the same time?

The issue has jumped to the forefront as part of the current debate on whether to expand the use of an aero package in the Monster Energy NASCAR Cup Series that debuted at this year’s All-Star Race at Charlotte Motor Speedway.

The package uses front air ducts, restrictor-plates, larger rear spoilers and splitters used from 2014. Together, the package lowers speeds, keeps cars closer together on the track, and from most accounts, increases passing.

With it come concerns, however.

The speed versus the show

As in any form of restrictor-plate racing – like at Daytona and Talladega – there are more ways for a driver to be taken out of contention by no reason of their own; teams with more resources see their advantages reduced; and according to some, the amount of driver input in relation to the outcome is also lessened.

From my personal perspective, in my 20-year career covering NASCAR, the first half of it was filled with weekend after weekend of track qualifying records being broken and the increase of speeds being lauded by fans and competitors alike.

But as speeds increase, so do the aerodynamic forces at work around the cars on the track. Engineers began to become the norm as crew chiefs for that very reason.

In the last 10 years, the quality of the on-track product has diminished because of those aerodynamic forces and in recent seasons NASCAR has tried various aero packages in an attempt to recapture some of the lost lure.

Certainly, there are drivers who got interested in racing for the speed and that thrill is a large reason why they opted for that career choice.

Brad Keselowski offered an impassioned defense Friday at Michigan International Speedway for NASCAR not to expand the use of the all-star race aero package.

“I think that package achieved one of those things and hurt the other two. In that sense, I consider it a net loss overall.”

Keselowski fears drivers who once considered NASCAR the ultimate career destination may look elsewhere if the Cup series becomes dominated by an aero package that no longer makes speed one of the primary cornerstones of the competition.

But is faster always better?

For years, there have been advocates for slowing cars down. Let’s remember, the “good old days” that many fans and drivers claim produced the best years of NASCAR also featured speeds nowhere near what has become commonplace in the Cup series.

Slowing cars down for is not new, either. NASCAR first adapted the use of restrictor-plates at Talladega and Daytona in 1988 after speeds increased so dramatically on those tracks. Yet the racing at Daytona and Talladega is some of the most popular among fans each year.

When the design of the Cup cars led to drivers racing in “tandems” at those tracks, there was a large uproar and NASCAR immediately went to work to adjust its aero package to gravitate back to “pack racing.”

The impact of the new package

Do the sport’s best drivers still excel in these vastly different circumstances?

When the aero package debuted to rave reviews in the Xfinity Series race last season at Indianapolis, William Byron won the event. He went on to win four races and the series championship last season.

Kevin Harvick won the All-Star Race and Harvick and Kyle Busch – who have combined to win nine of the first 14 races this season – were the two highest laps leaders in the event.

Clearly, the best drivers with the best teams still rise to the top, but there are likely a lot more factors which can lessen that advantage.

The question becomes whether the trade-off is worth it.

Will a dramatic shift in the direction of the all-star race package scare off fans and even competitors who have a need for speed? Or will the dynamics of the better racing product carry the day?

When I was little, I would race matchbox cars with my younger brother. I didn’t care how fast my car went or how fast his went. I only cared that mine was faster than his.

What do we care about today?