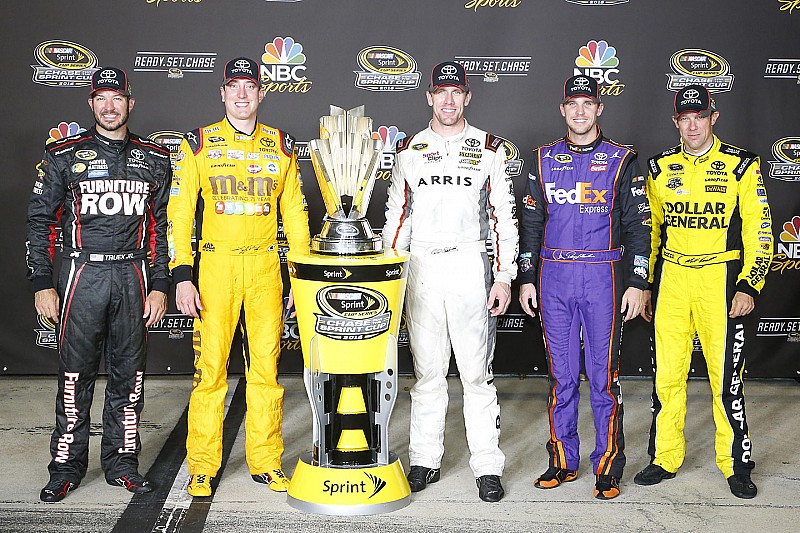 Is Toyota on the cusp of winning its second consecutive NASCAR Sprint Cup Series championship?

On the surface, through the first three races of the 2016 championship Chase, a reasonable case can certainly be made.

The challenge in this format is you now have to put all of that in your rear-view mirror and focus on the next three races.

Toyota driver Martin Truex Jr. has won two of the first three races (Chicagoland and Dover) and the race he lost – New Hampshire – he still led the most laps.

In addition, all five Toyota drivers (Kyle Busch, Matt Kenseth, Denny Hamlin and Carl Edwards are the others) have advanced to the second round of the Chase when the 16-driver field was cut to 12 following the Dover race.

Combined, the Toyota drivers have 15 victories this season. The remaining seven drivers in the Chase field together have 11. And of the three drivers who have led more than 1,000 laps this season, Toyota claims two – Truex and Kyle Busch.

The odds seem clearly in Toyota’s favor as the series heads into Saturday night’s Bank of America 500 at Charlotte Motor Speedway.

“The first box is checked, getting all five Toyotas into the second round. As a family, we look strong,” said David Wilson, president of Toyota Racing Development. “Arguably, we could have also won New Hampshire, but then again we could have also lost Chicago if it weren’t for those late-race cautions.

“The challenge in this format is you now have to put all of that in your rear-view mirror and focus on the next three races. I wouldn’t call what we have done as ‘dominant’ but what’s encouraging is at Dover we executed across all facets of the game – our pit stops were strong, our drivers make any mental errors – and those types of things can make a difference in who will be a champion.”

Not over until it's over

But don’t engrave the trophy just yet.

Wilson is under no illusions another Cup series championship is inevitable, in fact he already sees plenty of signs the competition is only going to increase as the 10-race Chase runs to its climax at Homestead-Miami Speedway.

“There’s no question the Hendrick Motorsports guys have been most noticeable, I think, of their improvement, because of their earlier struggles. They are now right there or in front of us every week,” he said.

“This is the beauty of the sport. The longer you get into the season you find the competition starts collapsing in on itself. We’ve been able to claim the final result in two of the last three races but by no means would I call our performances dominant.”

Johnson and Harvick showed strength in the Round of 16

The statistics show that even in their superb showing, there are other contenders who have what it takes to battle the Toyota contingent for the title down the stretch.

While Jimmie Johnson has not won a race so far in the Chase, he led the most laps at Chicagoland and was in command of the race at Dover until a mistake on a green-flag pit stop drew a NASCAR penalty and he went a lap down. He still rallied to finish seventh.

Kevin Harvick, who is the only non-Toyota driver to lead more than 1,000 laps this season, came away with the victory at New Hampshire and finished second at both Charlotte and Kansas in the spring, which are next two tracks on the schedule.

Also waiting to pounce is Brad Keselowski, who has four wins this season, and is the only driver to finish in the top-five in the first three Chase races.

“It would be awfully greedy to think we could get all five drivers in the final eight, it’s a hard, hard thing to do,” Wilson said. “But we’ll take it one race at a time and focus on executing and minimizing our mistakes.

“If we continue to do that, we should do OK.”

Maybe better than ‘OK,’ but there is plenty of racing left for that to change.