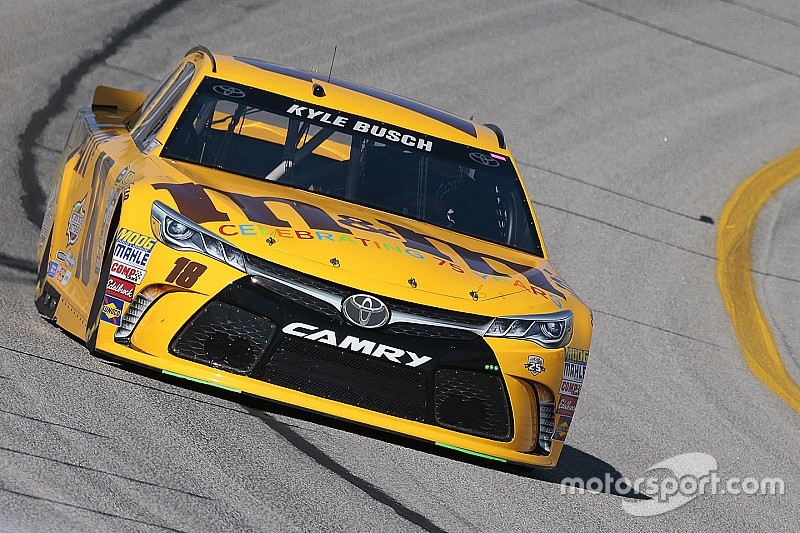 Stevens knew NASCAR’s expanded use of its laser inspection system this season could potentially cause problems for some teams, but he never intended to be the first to find out the consequences.

In the span of about 30 minutes Friday evening, Stevens – crew chief for Sprint Cup Series reigning champion Busch – went from planning to start Sunday’s race at Atlanta from the pole to working scenarios for starting from the back.

This season is the first NASCAR has introduced the LIS into its post-qualifying and post-race inspection processes.

Stevens said without having previously gone through the LIS following track time – whether in qualifying or a race – it was difficult to guess how much leeway to build into the car’s set-up.

“The parts move – everything moves – so you expect it to be a little bit different, but this is the first opportunity we’ve had to gather post information was right now and it’s game time and it was too much.

“We were perfectly legal beforehand - obviously, or we wouldn’t have qualified - and just the amount of load on the track moves everything a little bit and that little bit was a little bit too much.”

NASCAR senior vice president of competition Scott Miller said the use of the LIS was expanded this season because teams requested it.

“Teams asked for it because you have all heard the word [rear-end] skew and everybody talking about that,” he said. “This is a way to police that.”

How the system works

The LIS records items on the underside of each car, logging precise measurements – within 1/1,000th of an inch in some cases – of parts such as front and rear wheel cambers, wheel base and rear axle location.

The only penalty for Busch’s team is having its qualifying speed disallowed and starting from the rear of the field on Sunday.

Had the same violation been discovered following a race, Miller said there could be additional and more serious penalties.

Friday’s issues will be a learning experience teams throughout the Cup garage, Stevens said.

“If anyone is [paying attention] to this, they are probably going to back it way down and they’ll probably still lose sleep over it,” he said. “If I’m going to be made an example of, I’d much rather it be after qualifying than the race because you can’t afford a penalty like that after the race.”