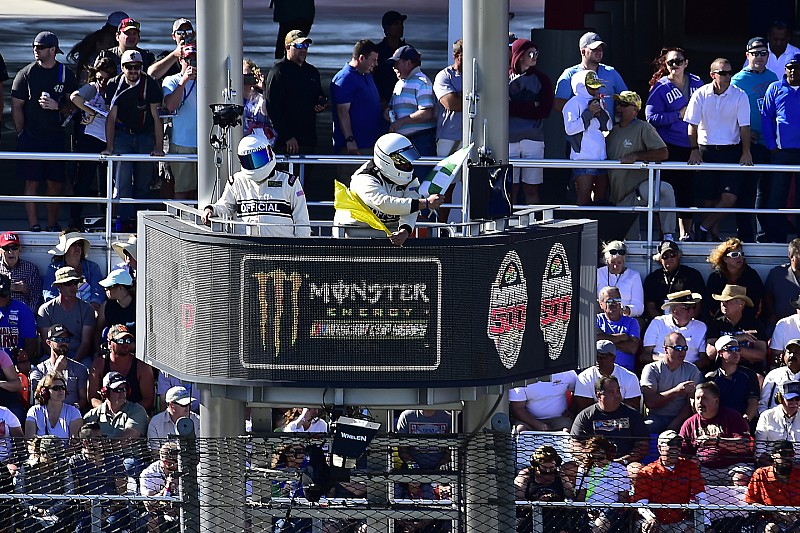 The Daytona 500 was the first Monster Energy NASCAR Cup race and also the first with the newly introduced concept of stage-racing in NASCAR.

The 200-lap race was split up into three stages (60 laps, 60 laps and 80 laps) with bonus points awarded to those inside the top ten at the end of both the first and second stages. There were also Playoff bonus points offered to those lucky enough to win each stage.

So how did it change the complexion of the Daytona 500?

The better question would be how it didn't change the complexion of the 500, and I don't mean that in a negative way. We saw its impact very early in the race when the Toyota teams of Joe Gibbs Racing and Furniture Row Racing employed a strategy usually only seen at road courses and at Pocono. They short-pitted instead of going the full fuel run. Battle lines were drawn between NASCAR's three manufacturers as Ford employed a similar strategy of pitting their teams together in a fascinating show of teamwork. The varying strategies gave the race a different feel from the get-go with several different plans panning out across the board.

Of course, there was plenty of exciting racing as well with drivers knowing there was going to be a caution at Lap 60 and an award for those inside the top ten when the green and white checkered flag flew. But unlike the Xfinity and Truck races from earlier in the weekend, there were no major incidents in the first stage, just a plethora of different strategies that set this race apart from previous editions.

At this point, the 500 didn't feel like the high-speed, straightforward plate race it usually does, but instead, a carefully calculated chess match. I welcomed that change. It added an extra layer to the event and forced you to pay attention during a point of the race where drivers are just surviving and many are riding at the back.

The second stage felt a lot like the first with manufacturers keeping with their coordinated plans. But everything changed on Lap 106, just past the halfway point. Kyle Busch, who had won the first stage, was leading a trio of Toyotas who had already made their pit stops with race leader Dale Earnhardt Jr. following close behind. Without warning, Busch went around with a right-rear tire failure.

When the smoke cleared, Busch, Matt Kenseth, Erik Jones, and Dale Jr. were out of NASCAR's crown jewel. This turned out to be a major turning point in the race with the tempo altered drastically from that point onward. Kevin Harvick won the second stage after successfully defending from an aggressive Joey Logano and it was obvious that the level of intensity was rising, as would be expected with the checkered flag inching closer and closer, but no one could have predicted what was to come.

Some were quick to blame the stages for the wrecks, which I have to disagree with. Sans the Busch accident, which was not driver error, the first two stages were very clean. But the final 80 laps were quite a different story. Lap 129, a 17-car pileup struck and contenders Jimmie Johnson, Clint Bowyer, Kevin Harvick and Denny Hamlin had their dreams of victory dashed.

Lap 137, a five-car accident out of Turn 4 sent three cars into the wall at pit entry.

Lap 143, an 11-car melee on the backstretch took out Jamie McMurray, Brad Keselowski, Daniel Suarez, and several others.

Lap 151, Chase Elliott, who was also involved in the backstretch pileup, was caught up in a three-car incident exiting Turn 2.

But when the green flag flew on Lap 154, the caution flag never returned. The complexion of the race had shifted once again. After some very intense racing that nearly resulted in more calamity, what was left of the field settled down into single-file running for the final 25 laps or so.

A dynamic race of unpredictability

From a game of pit strategy in the first half to an all-out wreckfest in the second to single-file racing and a fuel mileage race in the last quarter ... The 59th annual Daytona 500 was an enigma, if nothing else. With no more caution flags, fuel became a very real concern for several teams. In the final three laps, there were four different race leaders as the race for the win was on. Martin Truex Jr. passed Chase Elliott for the top spot as the No. 24 faded and ran out of fuel. Then Kyle Larson passed Truex, who suffered the same fate as the No. 24. Larson too ran out as he was passed for the win on the final lap by race winner Kurt Busch, who crossed the finish line ahead of Ryan Blaney with what was left of the battle-scarred No. 41 machine.

This year's Great American Race was an exciting start of a new era and can even be described as peculiar, when compared to previous 500s. But as Busch himself said in Victory Lane, you can only predict that this race will be unpredictable. I think the same came be said for the season that is to come. With all the changes and unknowns facing drivers and teams, unpredictability will be the theme of the year.

Every lap is important

But back to the original question. How did the addition of stages affect the Daytona 500? Well, the stages gave the race a different feel and in my opinion, it made every lap feel important. There was always something going on from the first lap to the last lap and wasn't that the point of stages? There was no doubt that the stages changed how people raced and how crew chiefs approached the season-opener, but I don't think we can blame the stages for the unusual amount of carnage, which mostly took place in the final third of the race. That is simply the nature of the beast known as plate racing.

I've always been a defender of allowing events to take their natural course, but perhaps this idea of "a race within a race" is the key to unlocking the full potential NASCAR's 400 and 500 mile events, eliminating mid-race lulls and avoiding a monotonous parade. But in truth, it's still too early to tell for sure. The true test will come at Atlanta Motor Speedway this weekend, where the "real season" begins.