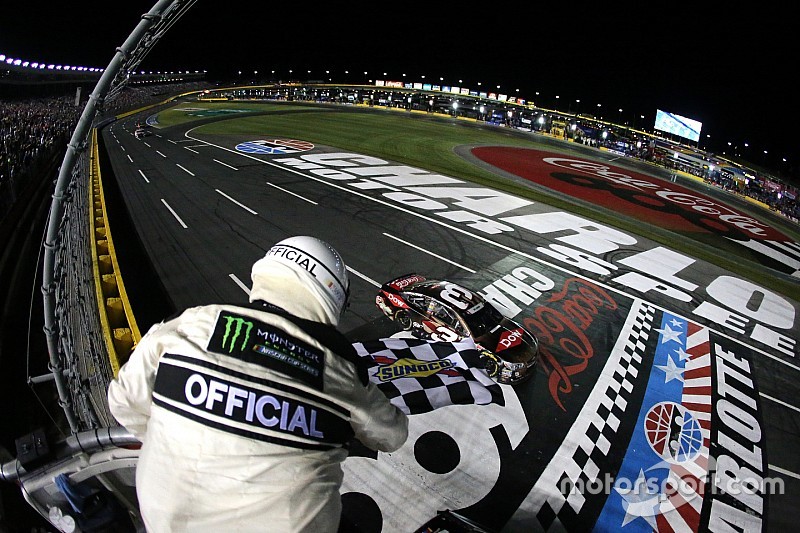 At one time, trips to Victory Lane were commonplace for Richard Childress.

He and driver Dale Earnhardt Sr. won six championships in what is now the Monster Energy NASCAR Cup Series and dozens of races.

Neither knew when they celebrated Earnhardt’s win at Talladega (Ala.) Superspeedway on Oct. 15, 2000, that it would be the last time they would share the treasures of victory or the last time Childress’ No. 3 would roll into Victory Lane for almost 17 years.

That possibility seemed even more remote in the days and weeks following Earnhardt’s tragic death in a last-lap wreck in the 2001 Daytona 500. Childress continued the team but removed the No. 3, changing it to No. 29.

For several years the No. 3 remained an iconic memory, part of the Earnhardt legend, enshrined in NASCAR’s history and its Hall of Fame.

Click on video window below about the No. 3 car back in Victory Lane.

It was only when Childress’ grandson, Austin Dillon, was ready to make a full-time move to the Cup series that Childress considered fielding the No. 3 again.

“I didn’t want to put just anyone in the No. 3 car. I probably never would have brought it back,” Childress said Monday morning at Charlotte Motor Speedway. “We kept the number with NASCAR throughout the whole time.

“We ended up, when the opportunity was there, to put Austin back in it.”

So they did, and the No. 3 returned to the track in the Cup series in 2014 and in grand style, with Dillon winning the pole for the season-opening Daytona 500.

While Dillon has had several good runs the past three-plus seasons, the closest he had come to victory was a third-place at Talladega last season.

That was until the wee hours of Monday, when Dillon and new crew chief Justin Alexander made a gamble to travel the final 69 laps of the Coca-Cola 600 without stopping and claimed the win on a fuel-mileage gamble.

For the thousands of fans who waited out a nearly one hour, 40-minute rain delay, both watching on TV and in the grandstands at Charlotte, it was a special moment.

A young driver’s first win in NASCAR’s biggest series coupled with a victory celebration surrounding an iconic car that once made trips to Victory Lane seem easy.

But there it was again, back in Victory Lane, and suddenly everything seemed right – Childress’ decision to bring the number back and to rest its future on the shoulders of his grandson.

“Nothing will ever replace Dale Earnhardt and the things he accomplished in his race car,” Childress said. “All we wanted to do was go out and carry it on for the race fans that love to see that No. 3 and the Dale Earnhardt fans.

“I know there’s pressure. It was hidden inside Austin, how bad he wanted to win. From the day he put the No. 3 on the car.”

Childress turned to his grandson, “I think you had the No. 3 on when you played in the (Little League) World Series, it was on your jersey. He’s always had a 3. He’s been a big Dale fan.

“It’s just so special to see that No. 3 in winner's circle again.”

Right where it belongs.

And unlikely to take another 17 years to see it again.