Mooresville, NC (May 16, 2011) – TRG Motorsports driver Andy Lally picked up a 33rd place finish for the No. 71 Interstate Moving Services Ford Fusion yesterday at Dover International Speedway for the running of the FedEx 400 Benefitting Autism Speaks.

The No. 71 Interstate Moving Services Ford Fusion was running 17th fastest during the second practice session on Friday, but after qualifying was cancelled due to rain on Saturday, the No. 71 was assigned to the 37th starting spot, based upon the NASCAR rule book.

Rookie driver Andy Lally was really excited about the weekend after just a couple of practice sessions in the No. 71. “The car was awesome and I was really hitting my marks on Friday during practice. The rain on Saturday didn’t help our efforts and really washed away the rubber we had laid down on the track for added grip. Although the Nationwide guys were able to get their race in on Saturday, it really didn’t help that our qualifying session was cancelled due to the rain. The car felt completely different on Sunday when it came time for the race and we spent a good part of the race making adjustments to gain some added grip.” 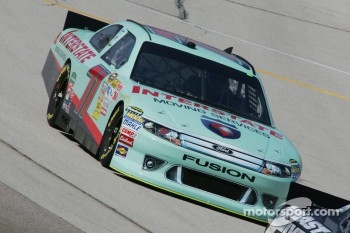 Crew Chief Doug Richert really had his work cut out for him on Sunday due to changing track conditions. “Our guys worked really hard all weekend and the car was great on Friday during practice. Andy did a great job adapting yet again to another new track for him. It was one of those situations where we missed out on qualifying and really didn’t get a chance know how the car would react based on the set-up for Sunday. Due to the concrete track surface and changing weather conditions all weekend, it was really tough getting the car where it needed to be and we had to make adjustments all throughout the race. Overall, we learned a lot and we’ll be better prepared for the race in the fall.”

Team owner Kevin Buckler was really proud of the team’s persistence throughout the race working to get the car dialed in. “Andy did a great job all weekend learning the Monster Mile and I was really proud of his lap speeds on Friday during practice. We had a great car here this weekend and the team worked hard getting it prepared, but sometimes mother nature doesn’t work in your favor and missing that qualifying session really hurt. The positive news is we gained a spot in the owner’s points and Andy brought the car home in one piece. Now our focus shifts to getting the car ready for the next two weeks in Charlotte and working our way back in the top 35. I’m really confident of my team and I know Andy has what it takes.”