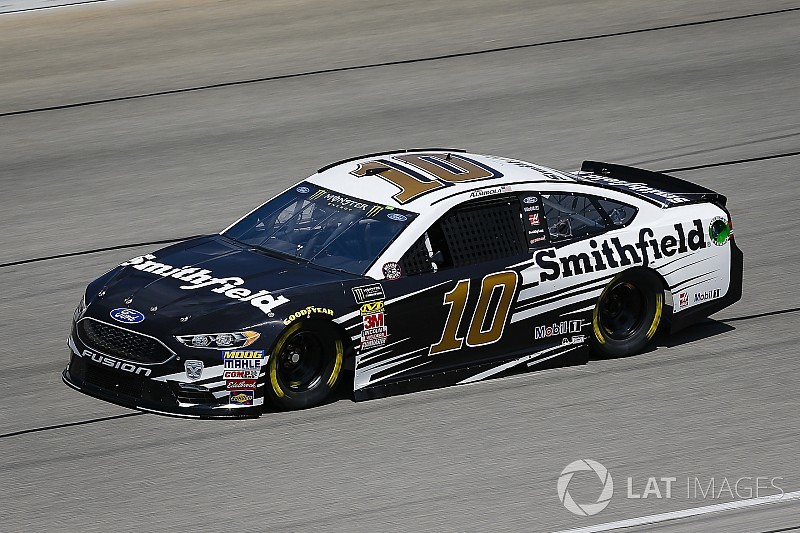 Aric Almirola cruised to victory over Kyle Larson in Stage 1 of Sunday’s Overton’s 400 at Chicagoland Speedway.

Almirola emerged as the race leader after a round of green-flag pit stops and held off a charge from Larson before holding him over by three seconds. It’s the first career stage win for Almirola.

"My car is strong everywhere. Our car is really fast," Almirola said during the break. "The track is really slick and fast and old and we're making good grip."

Blaney, who started second, quickly powered to the lead at the start as pole-winner Paul Menard dropped back to fifth.

Clint Bowyer moved into the runner-up position on Lap 13.

Five laps later, Bowyer made his way around Blaney to take the lead for the first time in the race as Blaney dropped back to second, followed by Kurt Busch.

On Lap 23, Truex – who started at the rear after his qualifying speed was disallowed Saturday – moved into the Top-10.

Early in the first run, Trevor Bayne reported that his cooling box was no longer working – not a good development considering the scorching temperatures on Sunday.

On Lap 37, Truex was among the first group of cars to hit pit road for a round of green-flag pit stops.

During the stops, Daniel Suarez was penalized for having a crew member over the wall too soon. Bowyer, who came in as the leader, was caught speeding on pit road. Bowyer was caught speeding again while serving his penalty and was forced to make a stop-and-go penalty.

Bowyer then had to make a third trip to pit road when he failed to do the ‘stop’ part of the stop-and-go penalty. When he was finished he was running 35th and two laps down.

Once the cycle of pit stops was completed on Lap 60, Almirola had moved into the race lead followed by Kurt Busch and Larson.

With 18 laps remaining in the stage, David Ragan was forced to take his No. 38 to the garage with a mechanical issue.

With 15 laps to go, Almirola held a slight advantage over Larson, followed by Kurt Busch, Truex and Harvick.

Almirola moved out to more than a three second lead over Larson with five laps left in the stage.