Almirola: "It was up to me" to show I belonged at SHR 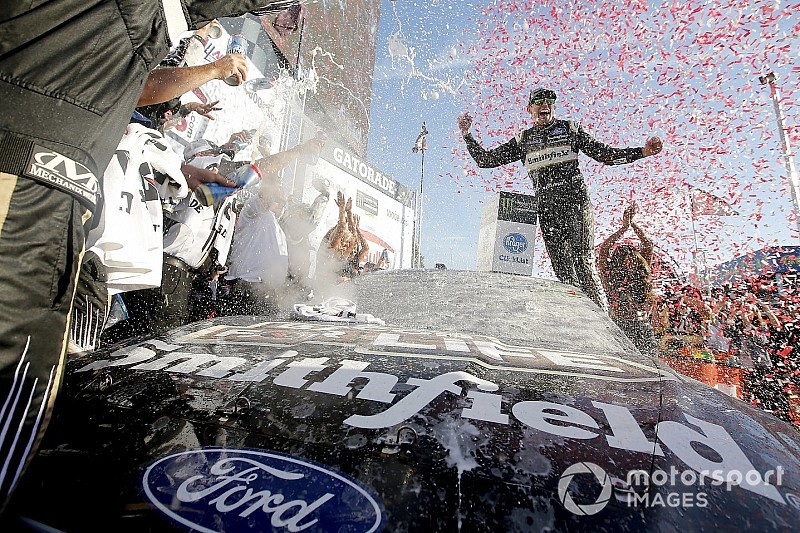 Aric Almirola had led more laps this season, he had been in better positions to earn wins, but the sweetest takeaway from Talladega (Ala.) Superspeedway on Sunday was the victory.

Almirola needed this win, not just to cement his spot in the next round of the Monster Energy NASCAR Cup Series playoffs, but for himself.

He needed a reminder why he was asked to join Stewart-Haas Racing before the start of the season – and even though they may never have asked Almirola for one, he wanted to give his team a reminder of why they chose him.

Almirola has had no slouch of a season by any means, but his second career victory was a much-needed relief.

“To win, that was the most gratifying part. The playoffs, transferring to the Round of 8, that’s secondary,” he said. “Just going to Victory Lane, getting that gratification, giving what I feel like my team deserves.

“They bring incredible racecars to the track every single weekend and they deserve to win. All of my teammates have won except me. Today was our day.”

And it was quite a day.

SHR took what is traditionally one of NASCAR’s most predictable races and dominated its outcome from nearly start to finish.

For much of the race, Almirola and his three teammates – Kurt Busch, Kevin Harvick and Clint Bowyer – ran nose-to-tail in a four-car group up front that more often than not was able to break away from the rest of the field.

By the end, it appeared the SHR drivers were going to decide the outcome of the race among themselves until a late-race caution sent the race into overtime with several drivers short on fuel.

Harvick was forced to pit before the race returned to green due to low fuel pressure. Busch – who had led much of the race – fell off the pace with the same issue shortly after the start. Bowyer, who had been running second to Busch, began having fuel intake issues on the final lap which allowed Almirola to get around him and into the lead.

A wreck on the final lap was cleared from the track and NASCAR allowed the race to end under green, handing Almirola his first Cup win in four years.

“To win for (sponsor) Smithfield, taking a chance on supporting me and this organization, Stewart-Haas Racing, to win for (co-owners) Tony Stewart and Gene Haas, to believe in me and give me this opportunity, for everybody that's helped me along the way in my career, to be in this situation,” he said.

“Last year, to think about potentially my career ending (with a back injury) and never knowing if I was good or not. I feel like I always had equipment as an excuse. When I showed up to Stewart-Haas Racing, that was no longer the case. I did not have that as an excuse.

“I have the best team in the garage. For me, it was up to me. It was time to go do my job and see if I'm good enough.”

Almirola already knew he was joining an impressive organization in SHR, but this season has been by far the group’s best.

Entering Sunday, Harvick had won seven races already, Bowyer two and Busch one. All four drivers had qualified for the 16-driver playoffs and all four still remained alive in the title hunt.

Almirola had excruciatingly close to a win on several occasions this year, beginning with the season-opening Daytona 500 and again as recently as last weekend at Dover, Del., but came up short.

Not a single person on the team had expressed doubts, but the lack of a victory with an organization that was churning them out almost weekly was weighing on him.

“We had that conversation in my basement about, ‘Man, I’m sorry, you guys are giving me incredible race cars. I don’t want you to give up on me, to doubt. I need that from you guys,’ ” Almirola said.

“I need him. Every single person on my crew has done nothing but reemphasize they believe in me, they know we’re going to win together, to keep putting ourselves in those positions.

“Today, what a relief.  To see all those guys in Victory Lane, give each and every one of them a hug, to say, ‘We finally did it!’ That was pretty special.”

Reigning champ Truex among those in playoff trouble