Aric Almirola cruised to victory in a caution-free Stage 2 at Texas Motor Speedway. 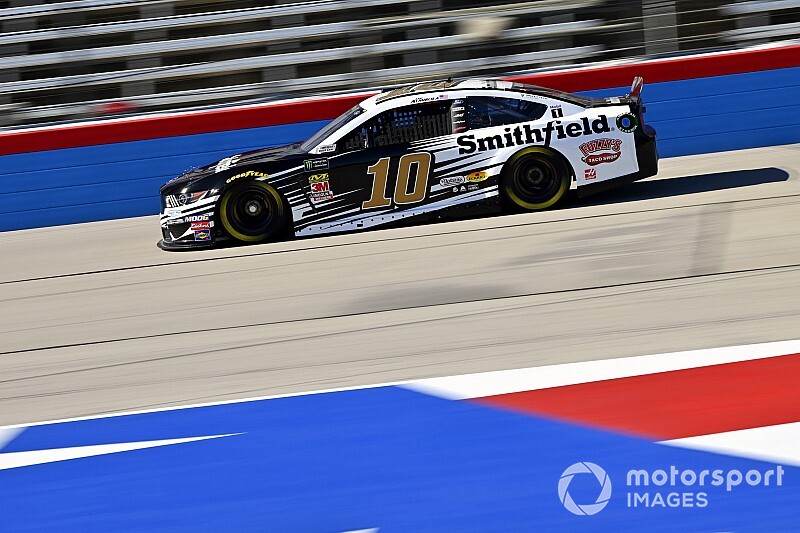 In sharp contrast to Stage 1 which featured six cautions, Almirola grabbed the lead in Stage 2, survived a round of green-flag pit stops and came away with the win.

Following the break between Stages 1 and 2, most of the lead-lap cars elected to pit but Bowman was among those who stayed out and inherited the lead.

On the restart on Lap 96, Bowman was followed by Johnson, Jones and Almirola.

Johnson moved into second shortly after the restart.

Johnson moved into the lead in Turn 1 on Lap 100 after a push from Almirola.

With 45 laps remaining in the second stage, Johnson held a steady lead over Almirola with Suarez in third. Jones ran fourth and Bowman fifth. Harvick, who had pit during the stage break, was back up to 11th.

On Lap 127, Larson moved up to eighth to become the highest running driver in the playoffs.

Bowman became the first driver of those who stayed out during the stage break to make a green-flag pit stop on Lap 135.

Almirola made his way around Johnson on Lap 139 to take the lead for the first time in the race. Johnson then make his green-flag stop on Lap 141.

Paul Menard, Suarez and Matt DiBenedetto were the next to stop on Lap 147.

Byron finally pit on Lap 152, which turned the lead back over to Harvick, who was among the drivers who pit during the stage break.

Right after taking the lead, Harvick elected to make his stop to get to the end of the stage as well.

With 10 laps remaining in the stage, Kyle Busch remained in the lead, but still needed a splash of fuel to make it to the finish.

On Lap 164, Busch finally pit for 3 seconds of fuel, turning the lead over to Almirola.