CORNELIUS, N.C. — There are many late model and stock car drivers who raced against Mark Martin at some point in the last 40 years. His 30-year NASCAR career plus years of running the short tracks across the country make him a pretty good judge of driving talent. 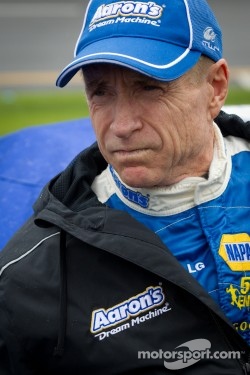 “That series was the training ground for many of us,” said Martin who won the 1978, 1979, 1980 and 1986 ASA titles. “Most of the races were long pit stop races so you learned the skills you needed to race in NASCAR. Plus, they had good television and print media coverage. You had to learn the whole package. They really prepared you well for moving into NASCAR.”

To win a title in the ASA you had to beat Eddy whose driving style and familiar black No. 88 was reminiscent of Dale Earnhardt’s aura in NASCAR.

“Mike knew his race cars, did his setup and tire staggers himself,” recalled Martin. “Like most of the greats at that time he was real, real aggressive. He would definitely put on a show and he was fun to watch.”

“That was back in a time when you could make a living running late models and racing in the ASA. He didn’t need to come to NASCAR, but he would have made a great NASCAR driver,” said Martin.

“He wasn’t your average driving personality. He was a bit different. Hard edged. He got the job done. He was just good. He was tough to beat no matter where he went. He was always one of the ones we needed to beat for sure.”

Mark Martin this weekend at Michigan

Keep your eye on Mark Martin this weekend at Michigan International Speedway. Both he and the racetrack should be very fast.

MIS became NASCAR’s fastest racetrack in June with a pole speed of 203.241 mph. After experiencing some blistering, Goodyear selected a new tire combination for the two-mile racetrack – a combination of the original tires from the April test and a slightly softer version of the harder tire used during the June race. About 25 NASCAR Sprint Cup cars returned to MIS on July 30 to test the tire combination and Martin’s No. 55 Aaron’s Dream Machine Toyota was at the top of the chart.

MARTIN ON MICHIGAN: “I thought we ran really well there in June. We had some bad luck at the end of the race that cost us a seventh-place finish. I was hoping we would be good when we went back for the tire test and it seemed like we ran just as good this time. We are all excited about going back. It’s funny, but you never know what is going to happen. Sometimes you go somewhere and you are good but you aren't when you go back. I’m as confident as I can be this weekend. Goodyear made a few changes from the last race. The left side is different but it’s a very subtle change. I think you’ll see some pretty high speeds but I think you’ll see some good racing as well.”

MWR SUCCESS: “I am really lucky to be driving such great equipment now. Toyota has done a great job. That’s one of the reasons why MWR’s cars are so fast now. Toyota has done a great job on our engines and our horsepower is way up there. These things are coming down the straightaways like you wouldn’t believe. I feel real fortunate. My crew chief Rodney Childers is sharp. I had no idea until I got a chance to work with him. This is as good of race team as I had in 2009.”