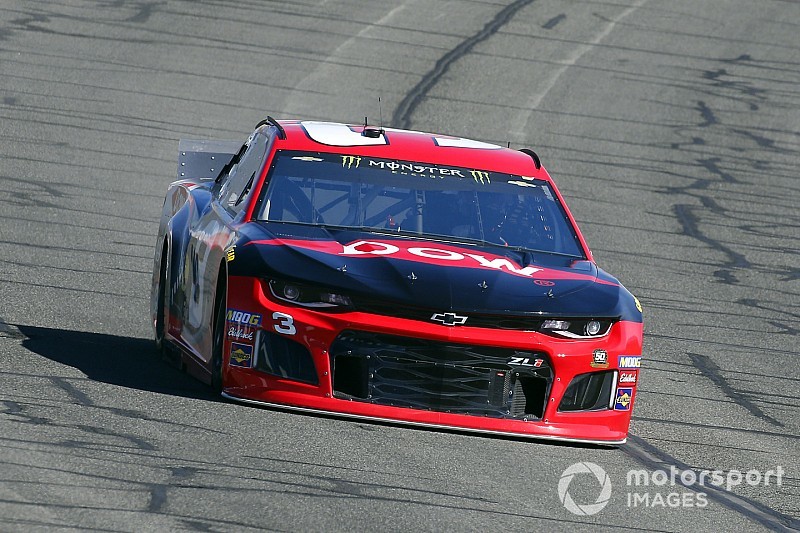 Austin Dillon has shown plenty of speed this season but has little so far to show for it.

All of Richard Childress Racing’s teams have shown raw speed this NASCAR season, but Dillion particular has been very fast.

Unfortunately, through the first four races of the Monster Energy NASCAR Cup season, Dillon has been unable to translate that speed into a solid finish. He hasn’t finished worse than 21st but also no better than 16th.

He is determined to change that this weekend at Auto Club Speedway.

“It hasn’t been an uphill battle. We just haven’t gotten the finishes that we thought we deserved,” Dillon said Friday. “The cars have had speed each and every weekend, and we’ve kind of take ourselves out of the race.”

Dillon is off to another strong start this weekend.

Although the final round of knockout qualifying produced some bizarre team shenanigans, Dillon was fastest through the first two rounds and was awarded the pole for Sunday’s Auto Club 400.

“This feels great, and I feel like we had the fastest car at Las Vegas also but we weren’t able to take home a pole or win,” Dillon said. “Everyone at RCR puts in so much effort and this is just a testament to that.

“A pole means a lot. It’s been a while. I think the last one was when I got one here a couple of years ago. That’s a long time between poles. It feels good to bring another back. This is a good track for us.”

The pole is the fourth of Dillon’s Cup career and second at Auto Club Speedway. His most recent pole prior to this weekend was the 2016 season.

Dillon said he believes part of problem with his No. 3 Chevrolet team this season has been “trying to get a little too much out of our cars.”

“At this point, I’ve felt like we’ve balanced our car to race a little bit differently to race better, so it should be a great showing on Sunday for us,” he said. “Phoenix was an awesome race for us. We had a fast car all weekend long. A competitive car.”

So, why the 21st place finish at Phoenix?

The team didn’t get a full tank of gas in his car on the final pit stop and Dillon was forced to pit for fuel under green before the finish.

“We were going to finish fifth and I was saving fuel and we had a shot to run third, we had the lap times to do it. I was lifting at the finish line the last 25 laps but it just wasn’t enough,” he said.

“We made a mistake. And we are going to make mistakes. I make mistakes constantly. Our team will. But we have each other’s backs and we will fight through it and get better.

“I am just proud to have (crew chief Danny) Stockman and the guys supporting each other; supporting me. I’m proud of the team we have built.”