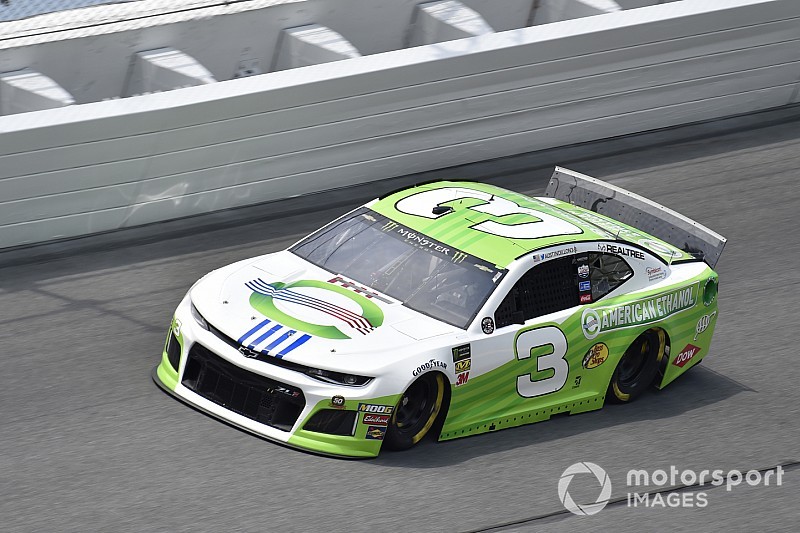 Bowyer moved out front with three of 50 laps left in the segment only to see Dillon get back around him with two to go and held off Alex Bowman for the stage win.

Following the break between Stage 1 and Stage 2, all of the lead-lap cars elected to pit and Michael McDowell was the first off pit road but pit again before the race went to green.

When the race returned to green on Lap 56, Elliott led the way followed by Ricky Stenhouse Jr., Bowyer, Ryan Blaney and Kevin Harvick.

Aric Almirola was penalized for speeding on pit road during his stop and had to restart from the rear of the field.

On the restart, Stenhouse got a shove from a fellow Ford driver to take the lead for the first time in the race.

On Lap 58, Kurt Busch got into the back of Stenhouse and sent him spinning into the frontstretch grass to bring out a caution.

All the lead-lap car elected to pit – almost all for fuel-only – with Bowyer the first off pit road. When the race returned to green on Lap 63, Bowyer was followed by Austin Dillon, Elliott, Logano and Blaney.

Austin Dillon got a shove back into the lead shortly after the restart. Blaney got the nose out ahead of Dillon at the start/finish line to grab the lead on Lap 64.

Austin Dillon got back around Blaney to reclaim the lead on Lap 65.

After 70 laps, Austin Dillon led the way ahead of Elliott. They were followed by Byron, Bowman and Kyle Larson.

On Lap 74, Kurt Busch tagged the wall in Turn 2 and then spun out in Turn 3 to bring out a caution. Some lead-lap cars pit but most stayed out.

On the restart on Lap 79, Austin Dillon remained in the lead, followed by Elliott, Byron, Bowman and Larson.

After 80 laps, Austin Dillon remained out front with Bowman and Elliott close behind in the chase for the lead.

On Lap 82, Harvick got into the back of Brad Keselowski coming down the frontstretch to trigger a multi-car wreck that also collected Joey Logano, Daniel Hemric and Daniel Suarez.

The race returned to green on Lap 87 with Austin Dillon leading the way followed by Bowman and Elliott.

After 10 laps and with rain threatening, Austin Dillon held a small advantage over Bowman followed Byron, Elliott and Larson.

On Lap 97, Bowyer got push from Stenhouse on the high line and was shot into the lead for the first time in the race.

With two laps to go, Dillon edged in front of Bowyer to reclaim the top spot.