The battle lines are clearly drawn for Sunday's Talladega race 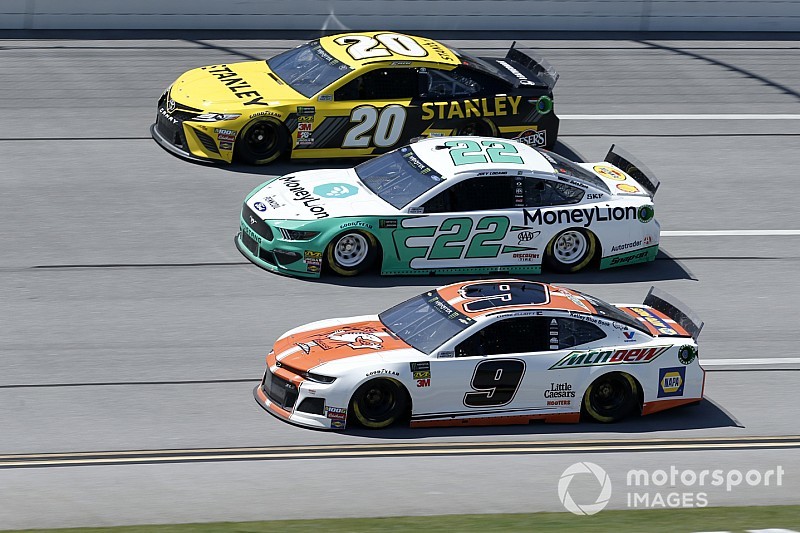 There are many unknowns about Sunday’s NASCAR Cup race at Talladega, but one thing appears clear – the battle lines drawn among the three manufacturers.

Cup teams have been faced with new aero rules, including the replacement of restrictor-plates with tapered spacers, and the changes have proved challenging for both teams and NASCAR this weekend.

While many drivers remain unsure how the aero rules will play out in Sunday’s race, there seems little doubt the race will continue to pit the three manufacturers and their top teams against each other.

“Because of Toyota, they started it when we went to Daytona in the 500, and they kicked everyone’s butt because they were selfless and stayed together,” Ford driver Joey Logano said. “We have taken that model and tried to make it better with working together and we have found success because of that.

“It is part of the game now. The cars are not what made it like that. Everyone used to help their teammate here and there but manufacturers didn’t really work together or were committed to each other.

“Once we saw how those four cars were able to stay committed to each other and beat everyone that day in Daytona, that forever changed the draft. That moment was a key moment in superspeedway history, in my opinion.”

Last fall at Talladega, all four Stewart-Haas Racing drivers – which run Fords – qualified first through fourth and worked diligently to run that way throughout the course of 500 miles.

The strategy proved successful, with SHR’s Aric Almirola holding off one of his teammates to pick up the victory.

New rules or not, that same philosophy is likely to guide Sunday’s race.

Chevrolet drivers met on Saturday to discuss how they can best work together to produce a win Sunday for one their own.

“I think it’s just looking at what the other teams have been successful in the last couple plate races, you look at those guys and they’re grouping up and they’re dictating the race,” said Chevy driver and pole winner, Austin Dillon.

“We don’t want to be in that position where we’re having to fight from behind the whole time and we have good numbers at Chevy and we need to use them.

“Honestly, it’s just looking at what the competition has done and trying to make it better.”

“There’s a lot less Toyotas than anything else. So it’s changed a lot for us. I would say more than anyone,” he said. “Strength in numbers I think has been, you know, kind of against us.

“But in general, the manufacturers have really worked hard at getting their teams all together and, and try and do the best job they can and get their manufacturer in Victory Lane.”

Regardless of the impact of the new aero rules, don’t expect that overriding objective to change Sunday at Talladega.