On Feb. 9, 1987, Ford Racing’s Bill Elliott set a Daytona International Speedway track record of 210.364 miles per hour in his famed No. 9 Coor’s Thunderbird. To this day, Elliott considers that one of the most impressive accomplishments of his stellar career and he talked with Ford Racing about what made that so special. 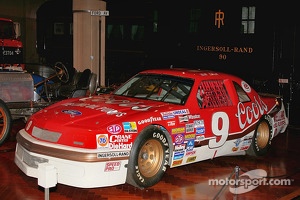 WHY WAS THE RECORD RUN OF 210 AT DAYTONA ONE OF THE THINGS THAT IMPRESSED YOU THE MOST DURING YOUR CAREER? “I just think for the time that we did that and how much faster we expanded the envelope in such a short period of time. It was 1983 when Cale (Yarborough) turned over trying to run just a little over 200 and then here we are four years later running 210 around that place. I guess why I said it impressed me the most is I was sitting down watching Cale try to run that deal, and I saw him get loose and lose it off turn four and turn over. I’ve said this a thousand times, but when I left pit road that day I didn’t know what would happen.”

WHAT WAS IT LIKE WHEN YOU GOT DONE WITH THAT LAP? “It probably took me another 30 minutes to start breathing normal again (laughing). It was quite a thrill, but it was in a time when we didn’t have the HANS device or the fancy seat belts. We didn’t have any of that stuff. You just got in the car and hoped you came back.”

WHAT DID IT MEAN TO DO IT AT DAYTONA? “I think for everybody involved at the time -- for Ford, for us at that point in time in our career, and for what it meant to the sport and for the fans -- it was a pretty big deal. I think everything that happened along that time period was special because we ran so well through ’87 and won the championship in ’88, but it all started with that record run in ’87 and it kept growing and expanding through that whole year.”

“I think if you look at where things are today, there again, we’re 25 years later. There’s no telling what they could be running if everything was the same. The first time I ever ran Daytona in 1976 I ran at 171 miles an hour. I came back 11 years later and did 210. I wasn’t on the pole in ’76. I think the pole was somewhere in the 180 bracket (Cale Yarborough was on the pole at 183.090 mph), but that was the Fourth of July race of 1976. That was the first time I set foot on a race track at Daytona and I qualified at 171 miles an hour. That’s an average speed, so to gain on that by 40 miles an hour is big. That’s what I was trying to put into perspective, and just like what I said about Cale, I think he was just trying to run 201 or 202 at that time. I came back and ran eight miles an hour faster than he did.”

WHAT WERE THE REASONS FOR SUCH A DRAMATIC INCREASE? “It was everything. It was a combination of we had everything dialed in on the car. Ernie was making great, reliable power at that time. Ford had made another stride with that Thunderbird and I just think everything came together. I actually came to Daytona in ’85 and ran 205, and then I picked that up five miles an hour two years later. In ’86 they restricted them, so you can’t really go on what they did in ’86, but in ’87 we came back unrestricted and did 210.”