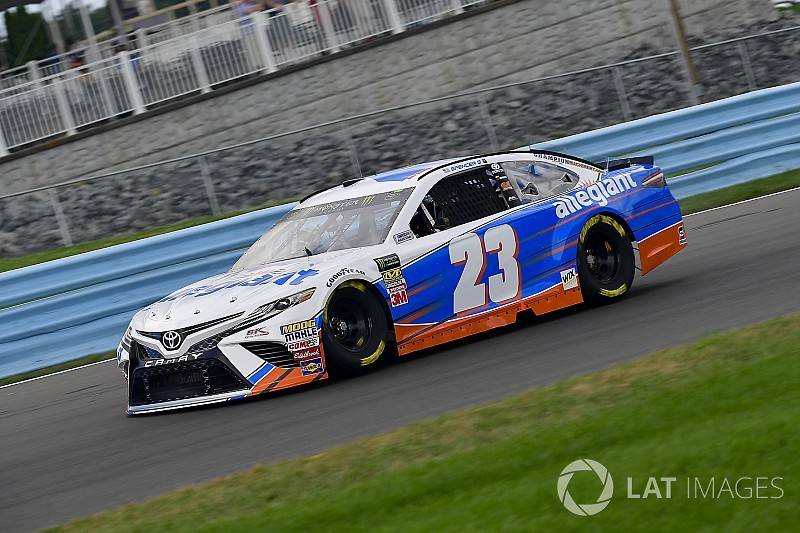 Mike Beam, president of GMS Racing, was in court Tuesday morning, hours before he helped the NASCAR organization unveil two new paint schemes at the Hall of Fame.

Beam wasn’t having legal troubles – his presence in court was part of the group’s efforts to purchase BK Racing, the bankrupt Monster Energy NASCAR Cup Series team that’s been put up for sale.

“The more and more I get into it, it’s pretty complicated to be honest with you,” Beam said of the process. “It seems like it is a good way to make attorneys money.”

Beam previously put in a bid of $1.8 million for the BK Racing charter as well as various other assets on behalf of GMS in what is essentially an auction-type sale.

Fielding a Cup team isn’t a new idea for GMS. The organization began with the plan to eventually compete in the top series with the younger Gallagher.

“I built that whole structure for GMS to go Cup racing,” Beam said. “We were going to do it last year but Chevrolet was going through a model change (from the SS to the Camaro). And we couldn’t get support from Hendrick (Motorsports) because they knew their plate was going to be full. We talked with them about it and decided we would just wait another year.”

GMS has an alliance with Hendrick, a four-team Cup organization.

“It’s been on the radar for a while and then this deal came up,” Beam said. “Maury was intrigued by it - he is a good businessman. We talked it over and decided to go down this route and see what it was all about. That’s how we’ve gotten to this point.

“If it’s meant to be it will work out and if not we’ll do something else.”

Two more groups have since submitted bids, which much be approved by NASCAR. According to Beam, those groups are Front Row Motorsports and one headed up by former BK Racing owner Ron Devine.

Monday (Aug. 13) was the deadline for bids to be submitted; the winning bid will be determined Aug. 20 and a day later a hearing to approve the sale is scheduled.

“It’s a process,” Beam added. “We hope we can get it done and hopefully Spencer can race some this year … get some seat time.