Going 200-plus miles an hour around Daytona International Speedway is one thing but piloting the Millennium Falcon at light speed? That takes some Disney magic. 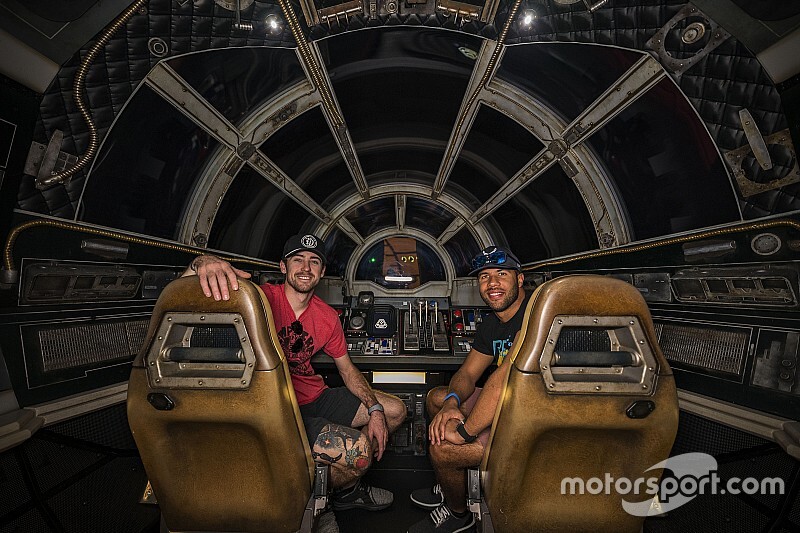 NASCAR drivers Ryan Blaney and Bubba Wallace got the chance this week to do both, the latter with a little help from Walt Disney World in Orlando, Fla., and a Daytona 500 promotional event at Galaxy’s Edge.

The area is set within the village of Black Spire Outpost on the wild frontier planet of Batuu and features two interactive and immersive rides – “Millennium Falcon: Smuggler’s Run” and “Star Wars: Rise of the Resistance.”

Asked about the opportunity to pilot the Millennium Falcon – known in Star Wars lore as “the fastest hunk of junk in the galaxy” – Blaney said, “It was pretty great. You could either go left or right or up or down, but you couldn’t do both. So, that was interesting.

“The rides here are cool. The detail they put into this place is incredible. It’s my first time here, it’s just amazing. It shows dedication with so many people here – a lot of people enjoy it.”

Blaney said he purposely didn’t look up information on the newest attraction – “Rise of the Resistance” – because he wanted it to be a total surprise.

His reaction traveling through the bridge of a Star Destroyer and dropped into the middle of a space battle in an escape pod certainly showed it succeeded.

“That was crazy, not only the technology of the things that were transporting us around – there were no tracks, they used wifi signals and preprogramme the route – made it really futuristic,” Blaney said.

“It’s just a huge, huge undertaking. That was my favorite one by far.”

Asked what was bumpier, a crash at Daytona or piloting the Millennium Falcon, Blaney said, “It’s close, pretty close. It was pretty rough but that’s alright, it’s a ‘hunk of junk.’ ”

Wallace and Blaney have been friends on and off the track since both got started in their careers at about the same time. One thing Wallace has never latched on to, however, was Blaney’s love of Star Wars.

“He’s a huge Star Wars fan, he’s a couple tattoos, he’s real into it. I haven’t seen one movie,” Wallace said. “I haven’t really understood the hype but being here, it gives you a new appreciation for it.

“I’m more of a fan of the work that went into make all this stuff possible, more than I am the Star Wars stuff. But all in all, it’s still a cool experience.

“For as long as I have been coming to Daytona you are down here for a week and a half with some on-track to start and then you have a couple days off to let your mind go and have fun with friends and family.

Wallace said he could see a comparison with Disney’s Star Wars attractions and their ability to place fans in the middle of an immersive experience to NASCAR’s efforts to get fans up close to the action and glimpses of what goes on behind the scenes.

“I think a lot of tracks are doing a better job of getting fans exposed to behind-the-scenes action. Look at Talladega and what they’ve done. Phoenix has done the same thing,” Wallace said.

“Any way we can latch on to the younger generation and show them the ins-and-outs and cool parts of our sport is good. They have to have an interest or excitement level like wondering ‘That’s how a tire goes on a race car’ or ‘That’s how a bolt goes in the bottom of a frame.’

“You have to that starting out. We can deliver that messaging. If they want to know how things work, we need to have a good outlet of providing that information and those resources to show them how it works.”

Erik Jones has 'no intention' of leaving Joe Gibbs Racing