Ryan Blaney survived a wreck-marred, rain-delayed NASCAR Cup Series race at Talladega (Ala.) Superspeedway to emerge with his first win of the 2019 season. 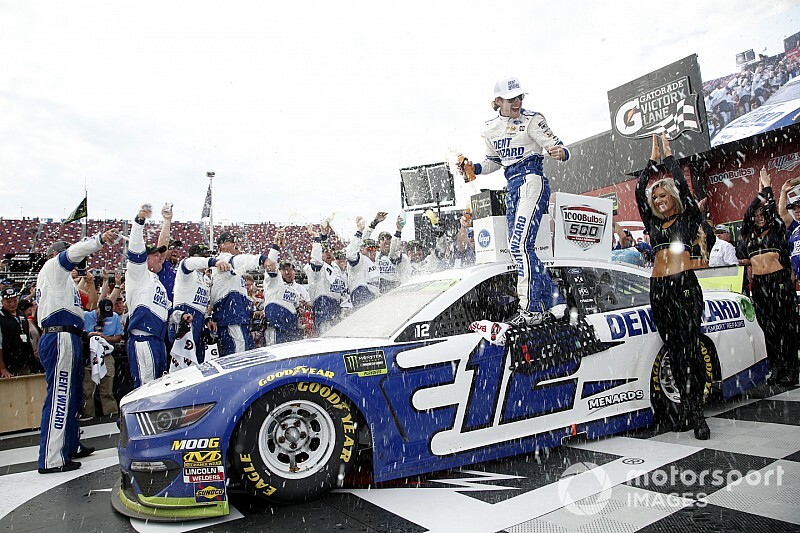 Ryan Newman got a shove from Denny Hamlin into the lead on the last lap in Monday’s 1000Bulbs 500 but Blaney edged Newman by seven one-thousandths of a second at the line to grab his third career victory.

"It's been an amazing effort the last two days to be honest with you," Blaney said. "Spinning out early yesterday (while pitting) and winning the big one today. I can't thank (Aric) Almirola there for helping me out there at the end.

"That big push that Newman and (Hamlin) got, I knew I wasn't going to be able to block it. They were coming so fast. I just wanted to stay on the bottom and I kind of pulled (Hamlin) off (Newman) there and I tried to make it up front against (Newman) and we hit above the (yellow) line and it kind of pushed me below the line.

"It's a big judgment call and you never know. But I definitely wasn't going below the line before we made contact. We're moving on man - it's pretty cool."

Asked what it meant to him to win at Talladega, Blaney said, "It means a ton. I've been coming here since I was really young, watching my dad run pretty good here a lot. Then driving for the Wood Brothers here. Man, it's a cool feeling. This new infield, it's so special being in Victory Lane. I love coming here and love it even more now."

After a tough race at Dover, Del., last weekend Blaney had a difficult path to advance to the next round of the playoffs but he made it a lot easier with his win.

The victory automatically sends him into the Round of 8 regardless of how he finishes in next weekend’s cutoff race at Kansas Speedway. He joins Kyle Larson as the only other driver locked in through wins (Larson won at Dover).

Following the break between Stages 2 and 3, all of the lead-lap cars elected to pit on Lap 112 with Brad Keselowski the first off pit road.

When the final stage went green on Lap 117, Keselowski was followed by Clint Bowyer, William Byron, Blaney and Joey Logano.

On Lap 122, Bubba Wallace went up the track and tagged Blake Jones, then hit the wall to bring out a caution.

A few cars pit but when the race returned to green on Lap 126, Bowyer continued to lead followed by Keselowski, Blaney and Kyle Busch.

A caution was put out on Lap 132 for debris on the backstretch, which appears to be the remains of a tire from Martin Truex Jr.’s No. 19 Toyota. Most of the lead-lap cars elected to pit under the caution.

On the restart on Lap 138, Stenhouse led the way followed by Kyle Busch, Logano, Matt Crafton and Blaney.

With 40 laps remaining in the race, Stenhouse remained out front followed by Logano, Blaney, Kyle Busch and Almirola.

On Lap 151, Kyle Busch drove into the lead on the bottom lane in Turn 1 with Elliott and Byron in tow behind him.

Bowyer spun off Turn 3 on Lap 153 to bring out another caution. His No. 14 Ford briefly got stuck as his rear wheels were lifted off the banking.

All of the lead-lap cars elected to pit, with Byron the first off pit road. When the race returned to green on Lap 158, Byron was followed by Chris Buescher, Stenhouse, Kurt Busch and Kyle Busch.

With 29 laps to go, Stenhouse got a push to the lead in the outside lane, then dropped in front of Byron on the inside lane.

On Lap 163, Byron got hit from behind and turned into Logano on the backstretch in an incident that collected several other drivers including Daniel Suarez, Ryan Preece, Kurt Busch, Crafton and Jones.

The race returned to green on Lap 170 with Stenhouse out front followed by Ragan, Kurt Busch, Buescher and Kyle Busch.

Suarez spun off Turn 4 on Lap 172 which brought out another caution. The race returned to green on Lap 176 with Stenhouse out front followed by Kurt Busch, David Ragan, Matt DiBenedetto and Kevin Harvick.

With a shove from DiBenedetto, Kurt Busch powered to the lead on the outside lane on Lap 176.

After 178 laps, Kurt Busch remained out front of DiBenedetto with Stenhouse tucked behind them both.

On Lap 180, Stenhouse navigated around DiBenedetto and Busch to retake the lead.

On Lap 183, Kurt Busch turned Kyle Busch while trying to push him and Kyle cut to the right into Keselowski and sent Brendan Gaughan’s No. 62 into a flip but he ended up landing on all four wheels.

DiBenedetto, Harvick, Buescher and Ragan were both involved as well. Blaney emerged from melee as the race leader. The race was red-flagged for several minutes to clean the track of debris.

When the race returned to green on Lap 187, Blaney was followed by Almirola, Ty Dillon, Newman and McDowell.

Big wreck ends Stage 2 at Talladega with Bowyer out front

Gaughan walks away from "easy, quick flip" at Talladega