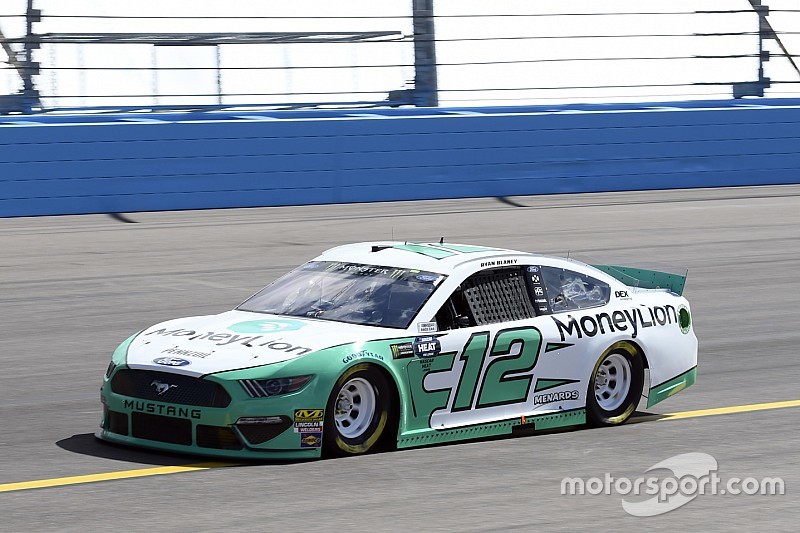 Ryan Blaney, the only Team Penske NASCAR Cup driver without a win this season, won the organization’s first pole of the season.

Blaney rocketed to the top of the leaderboard in the final five-minute round of Friday’s knockout qualifying to win the pole for Sunday’s TicketGuardian 500 at ISM Raceway near Phoenix.

Kyle Busch was fourth and Brad Keselowski completed the top-five.

The pole is the first for Blaney this season and first this year for Team Penske. It’s the sixth pole of his Monster Energy NASCAR Cup Series career and second at Phoenix.

“Qualifying hasn’t been our best this year but it’s the first short track we’ve been at,” Blaney said. “We’ve had speed all day, which has been kind of fun. We’ve just kind of tweaked on it and tweaked on it.

“It’s nice to get the weekend started off right. We’ll see how our race car is tomorrow (in practice). That was fun. At Las Vegas, was I wasn’t too happy about qualifying but now it’s cool you actually have to lift and you can work on your car.

“It’s a great way to start the weekend and hopefully it keeps going for us.”

Blaney, who was fastest in Friday’s lone practice session, ended up fastest in the second round with an average lap speed of 140.400 mph.

Also advancing to the final round were Elliott, Harvick, Truex, Byron, Logano, Hemric and Jones.

Austin Dillon was ousted from the Top 12 at the last moment as Jones made another last-minute successful qualifying run. He will start 13th.

Among those failing to advance to the final round were Aric Almirola, Jimmie Johnson, Kurt Busch, Paul Menard and Ricky Stenhouse Jr.

After an oil spill at the end of Xfinity Series practice, there much was hesitation among drivers to be the first out on the track for Cup qualifying and run through the speedy dry.

When much of the field did get on the track, Harvick bolted to the top of the leaderboard with an average lap speed at 138.980 mph.

Elliott ended up second (138.766 mph) and Stenhouse was third (138.451 mph). Menard was fourth and Chris Buescher completed the top-five.

Rounding out the Top 10 was Keselowski, Logano, Kyle Busch, Austin Dillon and Blaney.

A brief fight broke out between Daniel Suarez and Michael McDowell after Suarez approached McDowell on pit road following the session. Suarez was apparently upset that McDowell impeded his qualifying run on the track.

“I held him up on that lap, that was just a miscommunication,” McDowell said. “We were all waiting until the end to go out there.”

Said Suarez: “Just a lack of respect. You got to try to get out of the way if someone is making a hot lap. That’s racing.

Among those who failed to advance to Round 2 were Kyle Larson, Matt DiBenedetto, Clint Bowyer, Suarez, McDowell and Larson.

Larson said he never saw the flag to indicate his second qualifying lap would not count.

Keselowski’s No. 2 Ford was only car to fail pre-qualifying tech twice and had an engineer ejected for the remainder of the weekend. He will also lose 15 minutes of practice from Saturday’s final practice session.

Fight breaks out on pit road during Cup qualifying at Phoenix

To join Penske 'win club,' Blaney must "clean some stuff up"