But the memories of Daytona that Allison treasures most don't come from the 1979 backstretch brawl with Cale Yarborough.

Most of all, Allison remembers winning the Daytona 500 -- in 1978 and 1982. The victory in the 1978 Daytona 500 was particularly gratifying, because it followed a winless season fraught with engine failures in 1977, as Allison struggled to keep a car on the track as an owner/driver.

"In 1978, I was worn down from the previous two years and really was exhausted -- physically, personally exhausted -- and Bud Moore called and asked me to drive the car," Allison told the NASCAR Wire Service four hours before the green flag for last Saturday's Coke Zero 400 at Daytona. 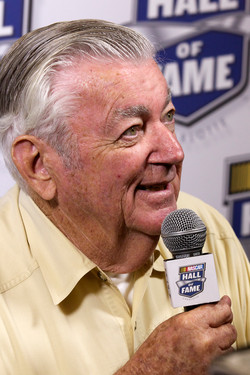 "That was great for me, but I didn't recover immediately. It took me a few more months to really recover, and we went on and really did some good things. But to win the Daytona 500 under those circumstances, that was special."

So was 1982, when the rear bumper of Allison's car was torn off in an early wreck, and the NASCAR Hall of Famer rallied to win the race.

And, of course, there's the Daytona 500 Allison doesn't remember at all. In 1988, he and son Davey Allison finished 1-2 in the Great American Race. But a horrific crash at Pocono in June of that year critically injured Allison, ended his career and wiped out all memory of the historic run with Davey.

"I don't remember any race in 1988 at all," said Allison, who lost Davey to a helicopter crash at Talladega five years later.

The ruckus in 1979 is a different matter. Allison remembers that race as if it were yesterday. Brother Donnie Allison and Cale Yarborough wrecked each other on the final lap, battling for the win, Bobby stopped his car on the infield grass, climbed from the car and defended his brother's honor with his fists.

Richard Petty took the checkered flag, but it was the fight that brought stock car racing to the national stage in the first live flag-to-flag telecast of a 500-mile NASCAR event.

The sanctioning body nevertheless made the drivers pay the price for behaving badly.

"They fined us $6,000 apiece for getting in that skirmish," Allison said.

Donnie Allison and Yarborough, who finished fourth and fifth, respectively, earned enough money to cover the fine, and NASCAR withheld $6,000 each from the purse for those two drivers. Bobby Allison wasn't so fortunate. His prize money, exclusive of contingencies, wasn't enough to cover the fine.

"So then we were good boys for a few weeks, and NASCAR refunded the prize money withheld. They've still got my $2,000." 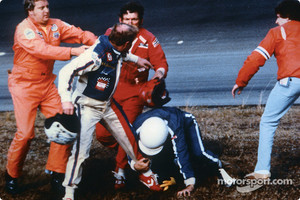 In fact, whenever talk turns to the 1979 race, Allison seldom fails to use the moment for some tongue-in-cheek lobbying for the return of his $2,000.

In all seriousness, though, his love for Daytona remains undiminished. Allison was the last driver to sweep both NASCAR Sprint Cup races at the 2.5-mile superspeedway before Jimmie Johnson added his name to the elite list last Saturday.

"I always really enjoy this place," Allison said. "I look forward to it, and when I get here, I have a really good time. I look around and I think about stuff that went on, but also, the area. I like the area.

"I still have my favorite restaurant over there -- Park's Seafood -- but this is the Super Bowl of our racing, so it always was special, and when you get back here, it's still special."

Good race strategy is important for Jimmie Johnson at Loudon