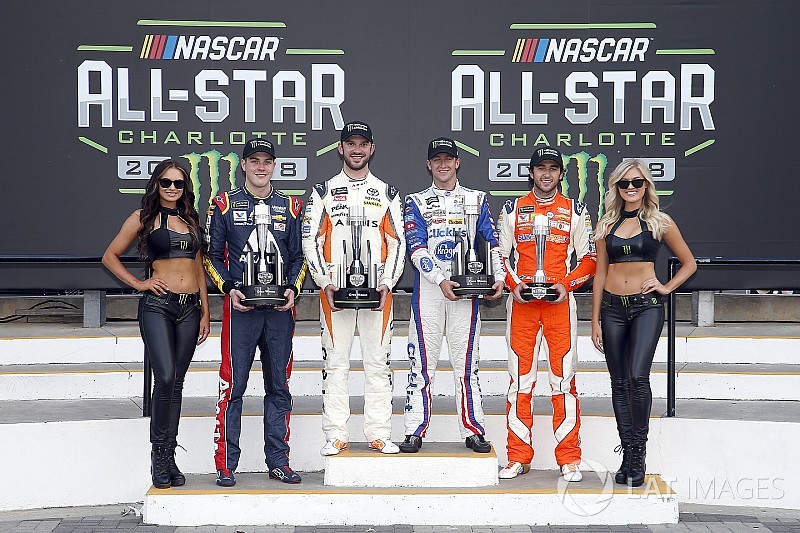 Alex Bowman, Daniel Suarez and A.J. Allmendinger won the three stages of the Open and earned spots in the All-Star Race field.

Once the race was over, Chase Elliott was named the winner of the fan vote, which also sends him into the All-Star main event.

Allmendinger got past Darrell Wallace Jr. and then Elliott in the final three laps of the final 10-lap segment to claim the stage victory and earn his way into the all-star field.

“I don’t care how many cars were in the field, we were crashing and I was going to win the thing,” Allmendinger said.

Jones ended up second in the final stage, followed by Elliott, Paul Menard and Chris Buescher.

Following pit stops between Stages 2 and 3, Wallace was the first off pit road thanks to a two-tire pit stop and took over the lead when the final 10-lap segment went green. He was followed by Elliott and Jones.

Wallace was able to stay out front even with the rest of the field on four new tires.

With five laps left, Wallace was working furiously to keep Elliott at bay.

Suarez lost his lead, then got it back and held off Allmendinger to win the second 20-lap stage and advance into Saturday night’s All-Star Race field.

Following pit stops between Stages 1 and 2, Jones took no tires and took over the lead when Stage 2 went green. He was followed by Byron, who took two tires, and Suarez.

Suarez bolted into the lead on the restart and the remaining cars fanned out multi-grooves wide.

On Lap 24, Elliott moved into second behind Suarez, but his No. 9 Chevrolet also seemed to have developed a tire rub.

With 10 to go in the stage, Suarez continued to lead the way followed by Elliott and Allmendinger.

Elliott powered to the lead off Turn 4 with seven laps left in the stage.

Off Turn 2 on Lap 35, Suarez got back around Elliott for the lead.

With four laps remaining, Allmendinger moved into second behind Suarez.

Bowman passed Aric Almirola with seven of 20 laps remaining and held off Jones to win the first stage and earn a transfer spot into Saturday night’s All-Star Race.

Elliott finished third in the stage, Menard was fourth and Wallace completed the top-five.

Almirola, who started on the pole when qualifying was rained out on Friday, took an early lead.

Bowman moved into second place on Lap 5, with Jones dropping to third.

On Lap 10, Menard and Bowman swapped second place before Bowman reestablished himself in the position on Lap 11.

Bowman moved into the lead on Lap 13, with Almirola moving back into second.

With five laps left, Bowman held a slight advantage over Jones and Almirola.