Bowyer and Gordon collide ... In the garage 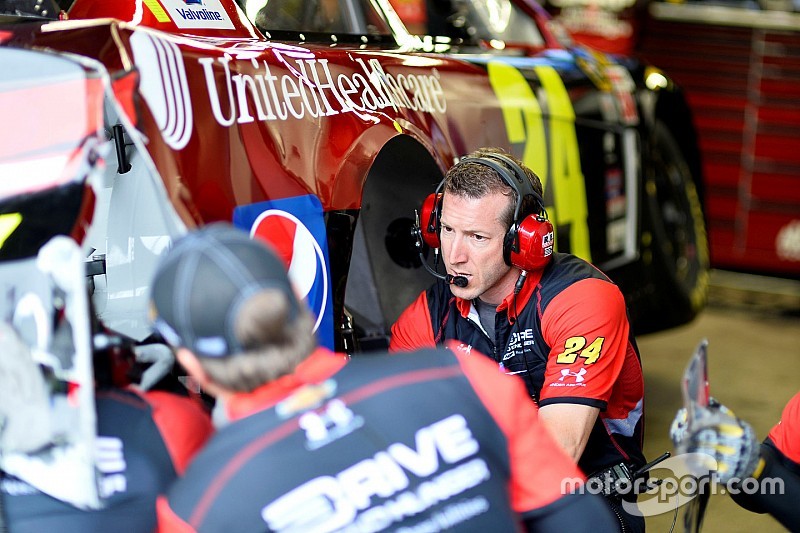 The second Sprint Cup practice started out with a bang for Clint Bowyer and Jeff Gordon at New Hampshire Motor Speedway on Saturday.

Thirty minutes into the session, Bowyer was coming back into the garage as Gordon was backing out of his stall. Neither driver had time to stop and Bowyer plowed into the back of the No. 24 Chevy.

That poor ol’ boy that was backing him out, I bet he feels like (crap). But you know, it’s a wonder it don’t happen more often.

“You can’t see out of the pit stall,” Bowyer told Motorsport.com. “He just came out and I was a comin’. That poor ol’ boy that was backing him out, I bet he feels like (crap). But you know, it’s a wonder it don’t happen more often. To be honest with you, I was pulling out of my stall, I went to come back out and the guy never moved. I was like, ‘whoa, whoa, whoa.’

“But it’s so tight in here. You hate to see that, but damn, especially with the 24 (laughs) and everything we have going on. It didn’t seem to hurt our car too bad. It hurt his bad — it hit in a bad spot. But that’s why we have guys that back us up.”

Bowyer returned to the track for practice — which was extended for five minutes. He posted the 16th fastest lap in the session — 131.324 mph. Kevin Harvick led second practice with a lap of 132.094 mph.

Gordon's side of the story

Gordon completed just 13 circuits prior to the incident. The team spent the remainder of practice replacing his quarter panel. His lap of 130.923 mph was 21st fastest of the session.

“The 15 was just starting to back out. I creeped out there and he cleared me. But the 15 took off. He couldn’t really see me because of that pit card. I don’t know if he glanced over or what but when he looked back, I was just right there and couldn’t go no where.

“It was just a combination of…I guess both of us can take fault with that. But I will say our team did an amazing job of fixing it. There was quite a bit of damage. I love seeing my crew chief (Alan Gustafson) getting in there  and getting dirty but not for that reason. That practice went a little bit better than the other one, so we’re gaining on ‘em.

"I'm not going to say it can't get worse because I know it can." Gordon qualified 23rd for the 5-hour Energy 301 on Sunday.

One of Bowyer’s better tracks

Bowyer felt fortunate that the No. 15 5-Hour Energy Toyota was not damaged severely in the incident as New Hampshire Motor Speedway is one of his best tracks on the circuit. Two of Bowyer’s eight career Cup wins were earned at the Magic Mile where he’s enjoyed four top fives, seven top 10s and has completed 99.8-percent of all laps he’s raced.

With eight races to determine the Chase, a victory would go a long way to Bowyer making the playoffs. He believes the addition of David Ragan to Michael Waltrip Racing has been instrumental to the company picking up speed.

“We’re a lot better than we were yesterday,” said Bowyer, who is currently 15th in the Sprint Cup point standings. “It’s nice to have a teammate again. David has done a real good job in the 55. They qualify good. We work together like you’re supposed to — and help build a better package.

“I’m a lot happier than I was — and yeah, I hope we get another practice in here. I’d like another crack at the bat here and see what we got. If not, I think we got a good balance and handle on our car right now.”