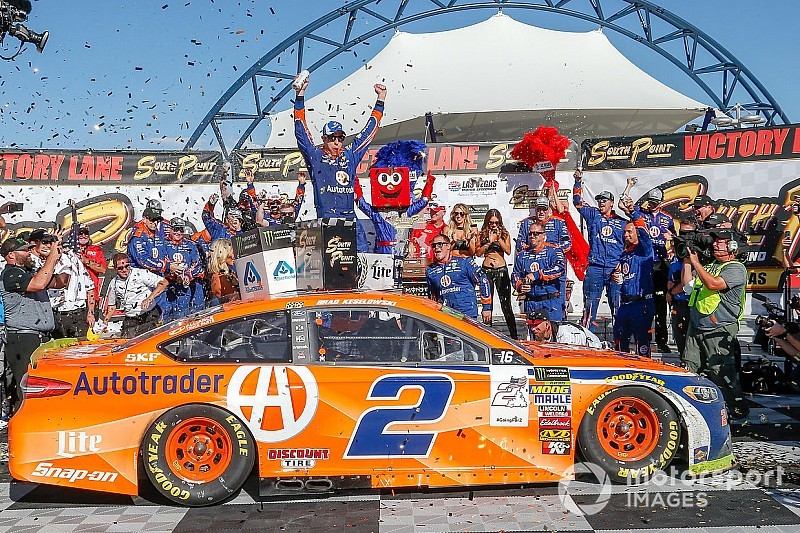 Also, the victory locks Keselowski into the second round of the NASCAR playoffs regardless of his performance in the next two races at Richmond, Va., and the Roval course at Charlotte Motor Speedway.

The win is Keselowski’s 27th of his career and third at Las Vegas. He is the third series driver to win three consecutive wins this season.

“I didn’t think it was ever gonna end. I was worried about running out of gas there at the end," Keselowski said after the win in overtime. "I know the fans can hear on this microphone and I want to say thank you to everyone who braved 100 degree heat all day. You guys are the real heroes. I get paid to do this. You guys pay to watch and thank you for doing that. Thank you for coming out today and tolerating the heat.

"We’re so glad to be able to win and get in Victory Lane again with the Autotrader Ford. What a special day for 500 wins for Penske, three in a row here, first win in the playoffs.  There are too many story lines for me to get it all right, but we’re very thankful and very proud for all of them.”

Asked if he's ever been on a roll like the one he is now, Keselowski said,

"I don’t know if we’ve ever had a team that was this strong on pit road before. This is the best we’ve ever been on pit road and that made a huge, huge difference today.

"I’m very thankful for that.”

Following the break between Stages 2 and 3, Keselowski was the first off pit road but several drivers elected not to pit, which left Jamie McMurray in the lead the final stage went green on Lap 167. He was followed by Larson, Trevor Bayne, Kyle Busch and Menard.

During pit stops, Alex Bowman was penalized by NASCAR for an uncontrolled tire.

Larson quickly got around McMurray on the restart to take the lead for the first time in the race.

Keselowski, who had pit for new tires during the break, finally ran down Larson and reclaimed the lead at the start of Lap 178.

On Lap 183, rookie William Byron appeared to blow a right-front tire and hit the wall, which brought out a caution. All of the lead-lap cars elected to pit for tires and fuel with Keselowski once again the first to exit pit road.

On the restart with 80 laps to go in the race, Keselowski led the way followed by Larson, Truex, Logano and McMurray.

With 65 laps remaining in the race, Truex made his way to the inside of Keselowski and reclaimed the lead. Logano ran in third, Larson fourth and Blaney fifth.

On Lap 213, McMurray hit the wall in Turn 3 and Chase Elliott had nowhere to go, piling into him. Both car experienced major damage. Elliott at this point is the third NASCAR playoff contender to get collected in a wreck in the race.

“I slid up and hit the wall. I only made it like two more laps before the tire blew out,” McMurray said.

After a round of pit stops, Keselowski again was the first off pit road and reclaimed the race lead. The race returned to green on Lap 223, Keselowski led the way followed by Logano, Larson and Blaney.

On the restart, Logano powered past his teammate and into the lead. Keselowski dropped to second and Truex ran in third.

With 34 to go, Kyle Busch appeared to spinout off Turn 4 after blowing a tire and then plowed into the infield grass, doing extensive damage to his No. 18 Toyota. All of the lead-lap cars elected to pit for new tires.

Keselowski, as he had much of the race, was the first off pit road and reclaimed the race lead when it returned to green with 30 laps remaining. He was followed by Truex, Logano, Larson and Blaney.

Keselowski, Truex and Larson went three-wide battling for the lead on the restart with Larson moving out front with 29 to go.

Denny Hamlin spun off Turn 4 with 21 laps left and also took a ride into the infield grass, tearing up his No. 11 Toyota as the race was slowed by another caution. Hamlin was the fifth playoff contender to experience problems in the race.

The race returned to green with 17 laps left and Larson in the lead.

As the leaders raced three-wide, Ricky Stenhouse Jr. wrecked on Lap 252 to force another caution, just after Keselowski reclaimed the lead. On the restart with 11 laps to go, Keselowski led the way, followed by Logano, Larson and Truex.

In the scramble for the second position after the restart, Johnson hit the wall and fell off the pace. He had been running in the top-five.

Debris in Turn 3 brought out another caution with six laps remaining. The race returned to green with two to go and Keselowski leading the way.

On the restart, Kurt Busch, Clint Bowyer, David Ragan and Michael McDowell got collected in a wreck through Turns 3 and 4, which brought out a red flag to clean the track and sent the race into overtime.

At the start of overtime, Keselowski led the way followed by Logano, Truex, Blaney and Larson.