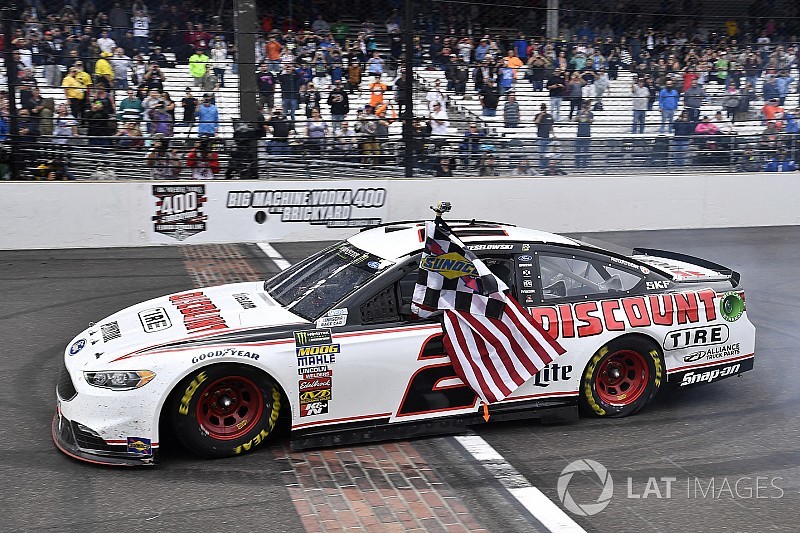 It’s hard not to be excited if you’re Brad Keselowski, closing the Monster Energy NASCAR Cup Series regular season with two huge career victories and the playoffs ahead.

Keselowski two wins – last week in the Southern 500 at Darlington (S.C.) Raceway and in Monday’s rain-delayed Brickyard 400 at Indianapolis Motor Speedway – are considered “crown jewel” events in the series.

The Brickyard 400 win was also the first for Team Penske, which has logged an impressive record at the track over the years in the IndyCar Series.

Keselowski’s recent wins were also his first in the series this season but he’s not about to believe he suddenly is in position to claim his second career Cup championship.

“Trying to look at the next 10 weeks, the next 10 weeks are races upon their own,” Keselowski said. “There’s a lot of conversation based around momentum, and (the win) is certainly great, but there’s not a lot we’re going to really take from it for (Las) Vegas other than the five bonus points and the money, with that in mind.

“We’re proud of this win for sure, but it’s no guarantee for any success in the playoffs. We have to go out and earn it each and every lap of each and every race.

“We’re excited and ready to go, but there’s a big challenge in front of us but also an incredible opportunity.”

Using strategy to their advantage

Even in Monday’s Brickyard 400 win, Keselowski’s No. 2 Ford was not the fastest car in the race, but his team played a perfect pit strategy through all three stages, leaving him with much fresher tires at the end than Denny Hamlin, who was leading on the final restart with three of 160 laps remaining.

“It was not an easy day. We certainly didn’t go out and just dominate the whole race, but my team executed everything perfectly, caught a little bit of break, but we put ourselves in position for that break and then executed before and after it,” Keselowski said.

The playoff points from the wins the past two weeks have improved Keselowski’s position in the 16-driver playoff standings.

But even with the new-found momentum, Keselowski knows trouble looms for those who look too far ahead, which is why his immediate focus is on this weekend’s playoff opener at Las Vegas and not whether he can make it to the Championship 4 at Homestead, Fla., in November.

“I think you get to looking too far ahead, that’s how you get yourself in trouble. I think you’ve got to go one week at a time,” he said.

“I know that sounds like the old football coach cliché, but that's really the reality here because you can dig a big hole so fast when you get to looking too far ahead.”