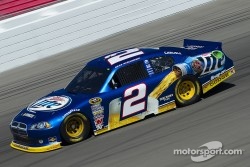 · This Week’s Charger… The No. 2 Miller Lite Dodge Charger team will use chassis PRS-747 during Sunday’s Jeff Byrd 500 at Bristol Motor Speedway (BMS). This is a brand new chassis to the No. 2 team.

· Keselowski at Bristol Motor Speedway… In addition to his two career Cup Series starts at BMS, Keselowski has raced in eight career NASCAR Nationwide Series (NNS) events at the “World’s Fastest Half-Mile.” In those races, he has recorded one win (2008), four top-five finishes and he has completed 1,811 of 2,075 (87.3%) laps contested, with 201 laps led. Keselowski has also made four NASCAR Camping World Truck Series starts at BMS with his best finish of seventh coming in 2010 while driving his own Brad Keselowski Racing entry.

· The Rest is History... Penske Racing has enjoyed its share of success at BMS. In 79 starts, the organization has produced eight wins, 10 poles, 22 top-five and 38 top-10 finishes at the track. Rusty Wallace earned seven of those wins and became one of the most successful drivers in Bristol history during his time behind the wheel of the No. 2 Dodge for Penske Racing. In 2003, Ryan Newman set the track qualifying record with his blistering lap of 14.90 seconds in the Penske Racing No. 12 Dodge.

· Follow Brad on Twitter… Fans can now follow Keselowski on Twitter at http://www.twitter.com/keselowski. Followers can get a glimpse inside his everyday life while keeping up-to-date on the latest news for the No. 2 Miller Lite Dodge team.

“Bristol is one of those tracks where you always have to be mindful of your pace, where you are on the track and who you are around. But you also have to be looking forward so that you can avoid that wreck that happens half of a straightaway in front of you. Short track racing and restrictor-plate racing are very similar in that you can get caught up in a wreck that you had nothing to do with. Bristol is a very aggressively-paced race. You have to stay tuned in to what’s going on the entire time if you want stay out of trouble. Penske Racing was able to win the 50th Daytona 500 and it would be great to pick up a win in the 50th anniversary year of Bristol.”

Brad Keselowski’s thoughts on coming off an off-weekend

“Although we have a lot of momentum at the beginning of the season, it’s been a pretty hectic start so it’s nice to have an off-weekend to recharge the batteries. Spending 11 days in Daytona and another 11 days on the West Coast is a pretty tough start. It’s a long enough season as it is and these breaks – however few of them we have – are good for the road guys. As a driver, though, I would race every day.”

“As a crew chief you look forward to going to Bristol because you don’t have to worry about aerodynamics or ‘dirty air.’ It’s all about finding mechanical grip and forward bite. If you can do that your driver can be successful. Track position will be important. Running up front should keep you out of trouble and in position for a good finish. Brad loves Bristol and his record reflects that. I’m confident we can go up there and contend for the win.”