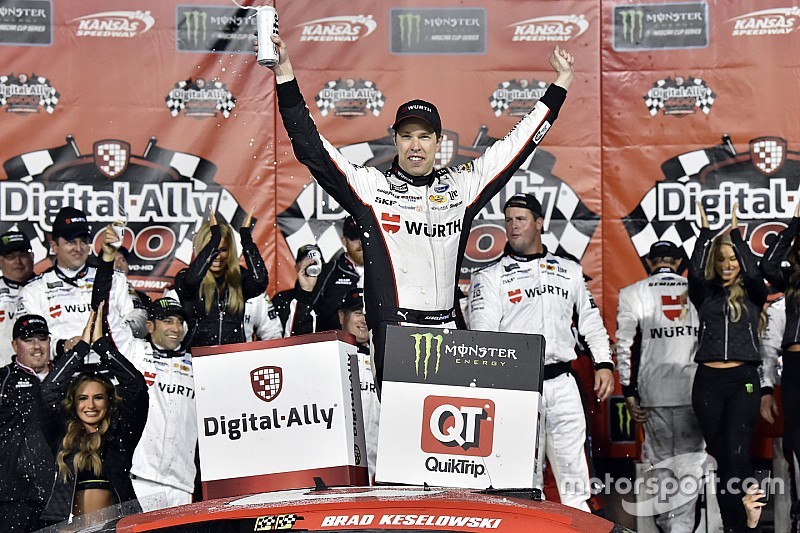 Keselowski, who at times was not even running in the top 10, gradually clawed his way back to the front and passed Alex Bowman for the lead with six of the originally scheduled 267 laps remaining.

A late-race caution sent the race into overtime but Keselowski was able to clear the cars behind him and hold off Bowman again for the win.

The victory is Keselowski’s third of the season and 30th of his career.

"I just want to dedicate this win to Mike Mittler," Keselowski said after the race. "You know, he helped a lot of guys in their career and I was one of them. He passed away yesterday. It's just a huge loss to the NASCAR community.

"What a great day. On the (last) restart, I just got a great launch and Alex Bowman, he's going to win a race. He did a great job today. We had a little bit of fresher tires than he did and we were able to make the move on the outside there and caught everything perfect.

Asked about the racing the new aero package produced at Kansas, Keselowski said, "I'm a little biased because I'm parked in Victory Lane, but this was an awesome race today. This rule package is really made for tracks like Kansas Speedway and I think the fans saw a great one today."

Following the break between Stages 2 and 3, all of the lead-lap cars elected to pit with Kevin Harvick the first off pit road.

On the restart on Lap 168, Harvick was filed by Ryan Blaney (who took two tires), Jones, Bowman and Kyle Busch.

Martin Truex Jr. was penalized during his stop for too many crew members over the wall and had to restart from the rear of the field.

On Lap 174, Bowman and Ricky Stenhouse Jr. split Blaney with Bowman taking over the second position and Stenhouse to third.

With 88 laps to go, Bowman moved into the lead as Harvick dropped back with a potential flat tire and eventually went to pit road.

With 85 laps remaining, Bowman held a small lead over Stenhouse while Kyle Busch moved into third. Harvick returned to the track in 27th and one lap down.

Bowman expanded his lead to 2 seconds over Kyle Busch with 60 laps to go in the race. Stenhouse ran third, Elliott fourth and Jones fifth.

With under 55 laps remaining, drivers began a round of green-flag pit stops not long after on Lap 217 NASCAR threw a caution for a tire that got loose in the infield grass. It ended up belonging to Ryan Newman’s car and he was penalized and had to restart from the rear of the field.

Once the final lead-lap car pit under the caution, Kyle Busch was the first off pit road but was penalized for driving through too many pit boxes on his stop. He had to restart from the rear of the field.

On the restart with 39 to go, Bowman was back out front, followed by Elliott, Stenhouse, Buscher and Tyler Reddick.

Elliott got around Bowman on the restart reclaimed the lead as Stenhouse ran in third.

With 30 laps to go, Bowman had gotten to the rear bumper of Elliott and was trying to make a pass for the lead. Stenhouse remained in third, Bowyer fourth and Reddick was fifth.

On Lap 239, a caution was thrown for debris off Blaney’s No. 12 Ford, who had blown a tire and was limping around the track trying to return to pit road.

Only a handful of lead-lap cars elected to pit, including Jones, Kesleowski, Aric Almirola, Kyle Busch and Johnson.

On the restart with 23 laps remaining, Elliott led the way followed by Bowman, Stenhouse, Bowyer and Reddick. Harvick received the free pass and returned to the lead lap.

Stenhouse went three-wide with Elliott and Bowman and came away with the lead for the first time with 21 laps to go.

With 20 to go, Bowman powered around Stenhouse to retake the lead.

Bowman and Keselowski battled nose-to-tail for the lead with 10 laps remaining in the race. Jones had moved into third.

With six laps to go, Keselowski got around Bowman for the lead with the help of some lapped traffic.

Matt DiBennedetto blew an engine and appeared to drop fluid on the track, which brought out a caution with four laps remaining. A handful of cars elected to pit including Larson, Jones, Harvick, Bowyer and Stenhouse.

The race went to overtime with Keselowski in the lead, followed by Jones, Bowman, Johnson and Elliott.

Chase Elliott runs down Harvick for Stage 2 win at Kansas