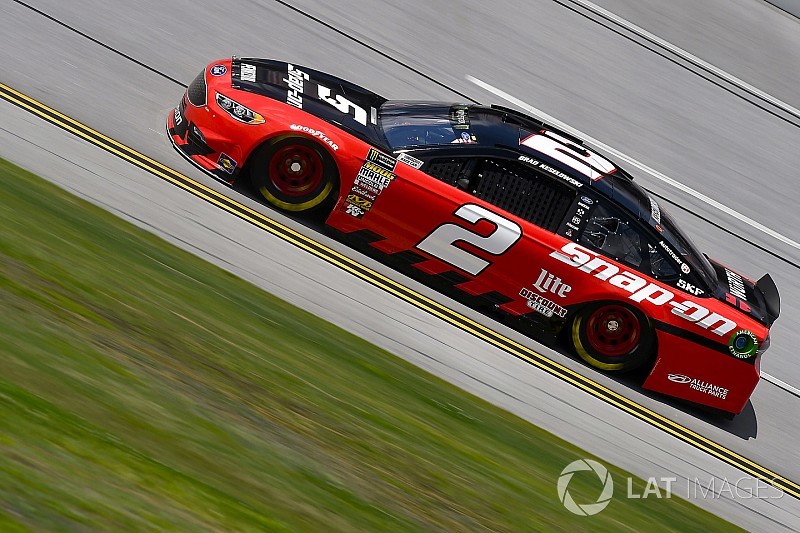 Brad Keselowski continued his mastery at superspeedways by picking up the Stage 1 victory at Talladega (Ala.) Superspeedway.

Keselowski was among a group of leaders that pit early in the stage and he inherited the lead when the remainder of the field headed to pit road with 14 of 55 laps remaining. He then held off Team Penske teammate Joey Logano to take the win.

Harvick, who started from the pole, remained out front until several teams began an early round of green-flag pit stop on Lap 14.

The move was made so ensure teams had enough fuel to make it to the end of the first stage without having to stop again.

Both Kurt Busch and David Ragan were penalized for speeding on pit road during their respective green-flag stops and were forced to do a pass-thru penalty.

Clint Bowyer fell off the pace on Lap 15 and headed down pit road with a cut tire before he planned to do his green-flag stop.

With 35 laps remaining in the stage, Alex Bowman held the lead, followed by William Byron and Kyle Larson – none of whom had yet made a pit stop.

With 25 to go in the stage, Bowman remained out front followed by Byron, Larson, Darrell Wallace Jr. and Johnson. Keselowski was the top running car of the drivers who pit early at 16th.

On Lap 39, Wallace moved around and took the lead from Bowman for the first time in the race.

With 14 to go, many of the drivers who had yet to make their first pit stop began that process.

While those cars made their stops, Keselowski cycled into the lead on Lap 44 followed by Logano and Truex.

Keselowski continued to keep a lock on the lead with five laps remaining.

Before the race began, six cars had to start from the rear of the field- Jamie McMurray, Ty Dillon, Daniel Suarez and Ryan Newman for going to backup cars, Chase Elliott for an unapproved tire change, and Aric Almirola for unapproved adjustments.

Kurt Busch had radio issues with his No.41 Ford and had to change his helmet and steering wheel but was able to rejoin the field during pace laps and retain his starting position.