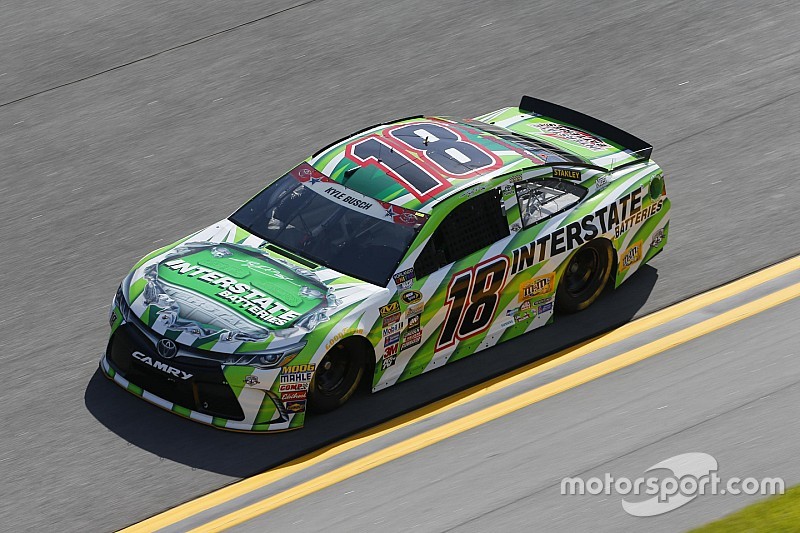 After rain delayed Thursday’s pair of practices, Sprint Cup teams finally had the opportunity to shake down cars for the Coke Zero 400 on Friday.

Happy Hour did not end well for Kyle Busch, however, who after wrecking at Daytona International Speedway last February, cut a right rear tire coming out of Turn 2 while running in tandem with his Joe Gibbs Racing teammates. Busch was running second in line and recreating the draft among the Toyotas that led to Denny Hamlin’s Daytona 500 win in February and slid nose first into the SAFER barrier with less than 10 minutes remaining in the session.

The No. 18 team was forced to pull out the back up car.

“It wasn’t any fun, that’s for sure,” said the defending Sprint Cup champion. “Your first instinct is to correct — and the car automatically corrects — then it finally catches or when it hit the apron and caught, it just turned back the other way and went into the fence.

“It was certainly a big hit. You have to thank NASCAR for its safety advancements in the cars and the driver’s equipment and things like that. Of course, the SAFER barrier, too. That could have been a heck of a lot worse than what it was.”

Carl Edwards also punctured a left rear tire during the sesssion, but felt a vibration and returned to the garage.

“I felt something vibrating, I thought it was the drive line or the engine,” Edwards said. “We had a puncture in the tread of the left rear tire. It was leaking in the garage. It was five or 10 pounds low when we came in. We got everything back together, we went out as a group and going into Turn 1 — about four laps into the run — it was Matt (Kenseth) in front of me and Kyle in front of him. I saw something come out from under Matt’s car and I thought, ‘I wonder what that is?’ Then I saw Kyle sideways.

“He drilled the fence. Honestly, he hit hard enough I was really worried about him. But it seems like he’s ok. Adam (crew chief Stevens) said he was good…It’s just kind of odd to have two out there like that. We were in the same group and had them happen one right after the other. There’s just some debris out there causing punctures. I got lucky because I don't think I would have stopped if we were racing out there, if I had felt that vibration. It was very slight. I’m fortunate that mine didn’t blow like that. It looked like a pretty violent hit.”

Brian Scott topped the speed chart for single lap runs with a speed of 199.349 mph after catching the pack early in the session. Austin Dillon was second with a lap of 199.344 mph

Dale Earnhardt Jr., the defending winner of the Coke Zero 400, was 32nd in single lap runs and 17th on the Best 10 Consecutive Lap Average chart. He complained about the lack of front grip in the car.

“In my mind, it was a nice day,” Earnhardt said.