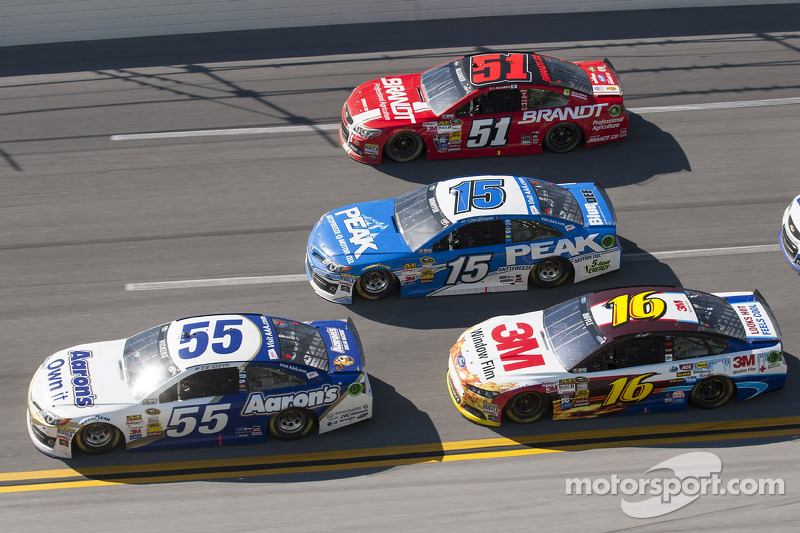 Brian Vickers powered to a 4th place finish at Talladega and hopes for a similar result at Kansas.

CORNELIUS, N.C. — No. 55 Aaron’s Dream Machine driver Brian Vickers owns the 10th most points of all drivers after the first 10 races of the 2014 NASCAR Sprint Cup season. He and the No. 55 team plan to improve those numbers at Kansas Speedway Saturday night. Vickers earned a fourth-place finish at Talladega on Sunday—his second top-five finish of the season.

BRIAN VICKERS ON 2014 GOALS: "They are still the same. We want to win races and win a championship. That’s easier said than done but we have always said we want to go out and try to win multiple races, we want to try to sit on poles and we want to try to win a championship. We’ve got off to a decent start, but we know we can do much better. There’s a lot of room for improvement which is a good thing. I like what I see here on the Aaron’s Dream Machine team as well as at MWR. We are getting closer each race."

ON MWR: “MWR is a great organization and we’ve come a long way and we compete week in and week out with all these teams. It’s more than just us and the guys on this pit box -- there’s a lot of hard working people back home at MWR in the race shop, but also at Costa Mesa TRD (Toyota Racing Development) out in California building us good engines.”

ON MWR SIGNING BOWYER, PATTIE & 5-HOUR ENERGY TO CONTRACT EXTENSIONS THIS WEEK: “That is fantastic news for everyone at MWR. That not only gives a solid future to the No. 15 team but helps our program at the No. 55 as well. We work together extremely well sharing information during the races, at the track and back at the shop. With Aaron’s on our car every race it’s gratifying to know we have that kind of corporate support.”

· MWR FANTERN: This week’s MWR Fantern is CW2 Lawrence Wesgaites, a US Army Apache Helicopter pilot, serving in Afghanistan. He’ll be back in the USA for Saturday night’s race at Kansas Speedway. Wesgaites is a lifelong NASCAR fan who has followed Mark Martin, Michael Waltrip, Bowyer and Vickers throughout their careers. MWR looks forward to Wesgaites joining our team this weekend and thanks him for his service. Each week MWR offers fans a chance to become an official MWR Fantern. This person will get the opportunity to be an “intern” on race day helping the pit crews with set-up activities, attending driver appearances and getting full access to the pit and garage areas. Fans can write in a submission to webmaster@michaelwaltrip.com or share a video on our social channels explaining why they should be the Fantern at the race of their choosing during the 2014 season.

· AARON’S: Aaron’s joined MWR in 2000 serving as a primary sponsor in Sprint Cup and Nationwide races. The Atlanta-based company has grown from 500 to 2,100 stores in that time. Aaron's carries only the best brand names in furniture, electronics, appliances and computers and offers a variety of flexible payment options. It's really easy to get started owning at Aaron's - you are pre-approved for up to $2,500 in merchandise without needing credit. Visit Aarons.com for more information.

· CREW CHIEF BILLY SCOTT: The 2014 Daytona 500 marked the first race for No. 55 Aaron’s Dream Machine Crew Chief Billy Scott. The 36-year-old began racing motorcycles as a 5-year-old and stock cars when he turned 15. He worked in the truck series as a mechanic before he returned to college to obtain an engineering degree. After graduating in 2005 Scott worked at Robert Yates Racing and began as an engineer at MWR in 2008. He served exclusively as the No. 55 team’s lead engineer the last two seasons.

Who will be NASCAR's ninth different winner of 2014?