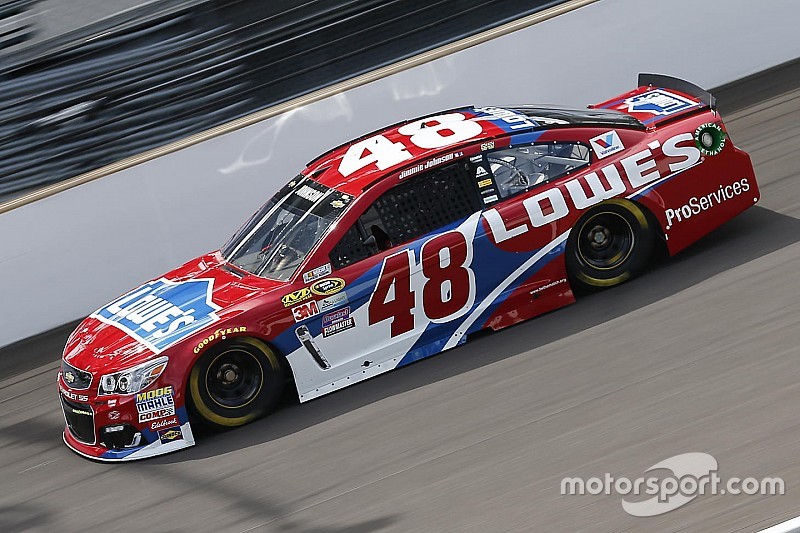 Johnson went out early in the session mocked up for a qualifying run and posted an average lap speed of 184.185 mph which easily stood up as the top speed for the rest of session at Indianapolis Motor Speedway.

Johnson is a four-time winner of the Brickyard 400 but has finished 14th and 15th the last two seasons.

Casey Mears was third-fastest, Kevin Harvick fourth and Ryan Newman the fifth-fastest speed. The rest of the Top 10: Carl Edwards (whose 30 laps of practice was the most of any driver), Chase Elliott, Tony Stewart, Jeff Gordon and Martin Truex Jr.

Busch and Carpenter get together

Just over an hour into the practice session, Kyle Busch spun out in Turn 2 while attempting to pass to the inside of Patrick Carpentier, who is driving the No. 32 Chevrolet this weekend for GoFAS Racing.

The spin brought the session to a brief halt as Busch’s No. 18 Toyota received some right-side damage in the incident.

“I was up to his (expletive) door and I’m in the (expletive) grass spinning out,” Busch said over his team radio after the incident.

Carpentier took full blame for the accident and immediately walked over to the No. 18 garage to apologize to Kyle.

"He was not very talkative, but that’s to be expected. I guess that’s racing, but it’s just sad that it happened in practice. I wish I would have let him by, but I just wanted to get some laps and some runs.  A couple of laps before I let Ryan Newman by in between one and two, and that went pretty well, and I should have done that with Kyle. Like I told him, ‘The next time, I’ll do it.’”

Gordon inside the top ten

The practice session was the first time Gordon, a five-time winner of the Brickyard 400, has been on the track this season. He is substituting for Dale Earnhardt Jr. in the No. 88 Chevrolet for at least the next two races.

Gordon ended fulltime competition in the Cup series last season and spent the first half of this season as a Fox Sports NASCAR TV analyst.

During practice, Gordon said his biggest issues with his car were in Turn 1. “Can’t carry much speed in there. It’s real tight in the center,” he said over his team radio.