BUSCH: Atwood out at Evernham, may return to Busch

Ray Evernham appears to have fallen out of step with his earlier commitment. Numerous times this year he boasted, "Casey [Atwood] is the future of Evernham Motorsports." The future appears to have been rather brief. On Monday, December 2, Casey ...

Ray Evernham appears to have fallen out of step with his earlier commitment. Numerous times this year he boasted, "Casey [Atwood] is the future of Evernham Motorsports."

The future appears to have been rather brief. On Monday, December 2, Casey Atwood was released from his contract with Evernham Motorsports. 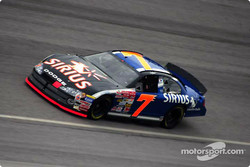 In mid-November last year, Casey Atwood was removed from the No. 19 car when Evernham Motorsports joined with Ultra Motorsports to form a new team. Atwood became the driver of the No. 7 Dodge with co-owner Jim Smith running the day-to-day operations.

Atwood, who scored one top-five and three top-10s during his rookie year in 2001, was unable to capitalize with the leftovers handed to his new team. This season, he had a best finish of 11th. With just two races remaining in the season, Smith's and Evernham's partnership dissolved over a driver change.

Atwood was forced to sit out the Phoenix race, but did run the No. 91 Evernham entry at the season finale at Homestead. Now it appears that Atwood is left minus a ride for 2003.

Enter Brewco Motorsports. When Atwood ran Busch in 1999 and 2000 with Brewco, he scored four poles and two wins. They may now try to relive some old magic as it appears Atwood will be rejoining the team in 2003.

As for the Ultra ride which Atwood was removed from, no driver has yet been named to pilot the No. 7 Dodge in 2003. Regarding Evernham's stables; it will remain a two car team, the No. 9 of Bill Elliott and the No. 19. Jeremy Mayfield's ride may also be on the rocks as he too struggled in his first full season with Evernham.

Is it time for NASCAR to consider a spec engine?