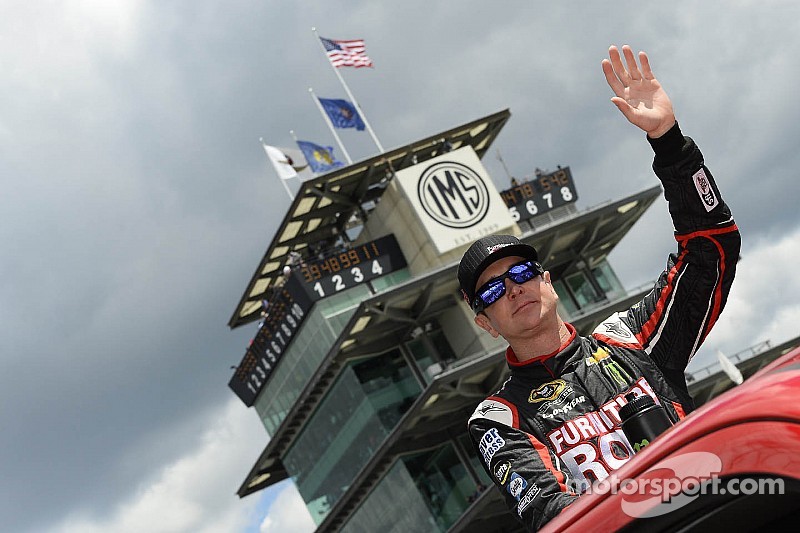 INDIANAPOLIS – Kurt Busch joked that this weekend at the Brickyard felt like “an off weekend”.

Certainly after May – and the 906.5-miles Busch raced between the Indianapolis 500 and Coca-Cola 600 – 400 miles on Sunday should seem like a breeze.

But as an athlete, doing the Indy-Charlotte double pushed Busch beyond any preconceived barriers he might have set for himself.

“The way that the month of May went was a tremendous feeling and a sense of accomplishment,” said Busch, who finished sixth in his Indy 500 debut to win rookie honors. “I really enjoyed it all the way through with the two race teams, of course, with Andretti Autosport, Stewart Haas Racing, and all the people along the way that helped make that double happening.

“Still writing thank-you notes. It's incredible the amount of people that we touched and that reached out to us. So it's a lot of fun to come back to Indianapolis…I won't be bumping into any of the IndyCar folks but the atmosphere here at Indianapolis is always special, and now I have a greater appreciation for the Speedway. And I hope the respect that I'm going to show it this weekend, it will help me bounce up on some of my results here at the track.”

Busch witnessed the strength of the IndyCar Series first hand. After reaching speeds in excess of 230 mph, he earned a new appreciation for the tours “tremendous group of drivers and team owners”.

“The sport of IndyCar I think is at a healthy status,” Busch said. “It's back similar to where I remember it in the early '90s before the split on how you have a group of competitive owners and then the drivers. They're so deep with talent and skill.

"The oval experience that they all have now, such as (Helio) Castroneves, I mean he won his first Indy 500 in '01, his oval experience, and guys like Will Power who are tenacious on the road courses and the Andretti group has now molded into a bona fide championship contender. They won with Ryan Hunter-Reay a couple years back and then they won the Indy 500 this year.

“The depth I think, when I've looked at different racing series throughout my career, you go through depth to find the strength… IndyCar is getting back to that. They're getting back to depth and competitiveness all the way through their field.”

The depth I think, when I've looked at different racing series throughout my career, you go through depth to find the strength… IndyCar is getting back to that. They're getting back to depth and competitiveness all the way through their field.

That respect that Busch developed for the Indy experience throughout the month of May earned him a mutual respect from the open wheel crowd. Stock car fans already knew of Busch immense talent and his resume which includes a NASCAR Cup title and 25-career wins.

“I was at a Chevy autograph session this morning and another stage appearance and the Indiana natives and a lot of the Midwesterners were real excited as a stock car fan to come to Indy and watch me race,” Busch said. “It's been great to receive the congrats and the respect from the Midwesterner fans.

“What I saw here in the month of May was very different than what it is here in July and August. It's their big backyard party. It's their moment to show the world what Indianapolis means and what this oval has always meant to them. And so the people make this Speedway what it is and it's very special. I'm glad that they were rooting me on.

“And even when I got back to Charlotte, the crowd was there, ‘Hey, our NASCAR boy went up there and did good and we're proud of him.’  That was a special feeling. Now we're back here, a regular Cup weekend. My focus is with the Cup car but it's been great to have the Midwestern fans support me.”

Busch is gracious enough to give his team owner Tony Stewart a lot of the credit. Although the Busch family roots are in Chicago, there’s no denying the popularity of Stewart, an Indiana native who grew up 45 minutes from the Speedway.

If Busch can lean on his newfound support from America’s heartland and the knowledge of his teammates and fellow Brickyard 400 winners Stewart and Kevin Harvick, he might have an opportunity to improve on his lackluster track record. In 13 starts, Busch has just one top five which he earned his rookie year in 2001.

“It's been tough in a stock car here for me,” Busch said. “The diamond-cut surface is one of the unique challenges in our sport where the track is fresh and it's fast when we first get out there here in a couple hours. And then the track rubbers in after every practice session and continues to get greasier and greasier, and it's just because the rubber is filling in those diamond grooved surfaces.

“So the track goes through a big change throughout the weekend. We'll, of course, adjust to the changing track conditions. And our team has turned a good corner since Indianapolis when I ran here in May.”

Under the direction of rookie crew chief Daniel Knost, Busch won at Martinsville Speedway – the sixth race of the season. He’s posted two top fives in the 13 races since then. Although the No. 41 Haas team has struggled at times, Busch has learned that being aligned with a solid organization solves most of a driver’s ills.

“It’s been great to drive anything and everything over the years,” Busch said. “Half the battle of finding success is teaming up with a good team. And I don't know what's around the corner next and we'll keep our eyes open.

“But right now my focus is on this 41 car and the Haas Automation Chevy and making it as fast as I possibly can and giving my undivided attention to it to be more competitive and to make a good run through this Chase this year.”