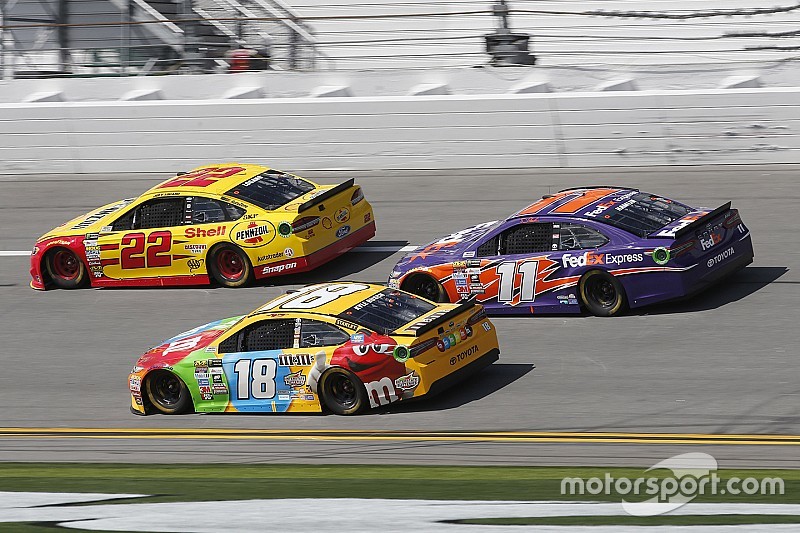 Kyle Busch believes that the two Team Penske Fords are stronger together than the four Joe Gibbs Racing Toyotas.

And he has proof to back up that statement. As the Clash raced towards a climatic conclusion last weekend, there were four Joe Gibbs Racing Toyotas lined up at the front of the field. But at the white flag, Denny Hamlin was alone in the lead position with two hungry Penske drivers right on him.

Going into Turn 1, he threw a big block on Brad Keselowski that ended in calamity. Penske still took the trophy though as Joey Logano sneaked by the incident on the outside.

“I think their two‑car speed is greater than our four‑car speed," Busch said during Media Day. "When they're able to get their two cars together, they obviously can do a really good job. I mean, us four together, we're up front leading the race. They came up through there, got together nose to tail, the 2 and 22 pushing them. They started pulling us apart, able to get up front, up towards the lead. Certainly with that fact right there, it shows that they're pretty good.”

Penske showing strength at plate races is nothing new. Logano and Keselowski took the checkered flag in three of the four plate races in 2016 and two of the four in 2015, including the 57th running of the Daytona 500.

So if four can't beat two, what can Busch and JGR possibly do to put a stop to the Penske dominance at plate tracks?

“I don't know," admitted the 2015 Monster Energy NASCAR Cup champion. "I haven't seen it on film yet. I just know it because of what I remember. But to go back and look at it and study it and see if there's a way to defend it, I'm not exactly sure yet. Maybe. But also, I mean, the track's 38 feet wide, whatever the heck wide it is. Our cars are only seven‑and‑a‑half feet wide. There is a lot of other space or real estate they have to use. I don't think you're always going to be able to hold them back.”

However, the Toyota fleet were able to hold Penske and all their rivals back during last year's Daytona 500. In an incredible show of teamwork, the four Gibbs drivers and Martin Truex Jr. in the Furniture Row Racing machine worked together to keep all challengers at bay at the end of the race. On the final lap, Hamlin took the win after a daring pass on teammate Matt Kenseth, then beating Truex to the line in the closest finish in 500 history.

But will they be able to do that again on Sunday?