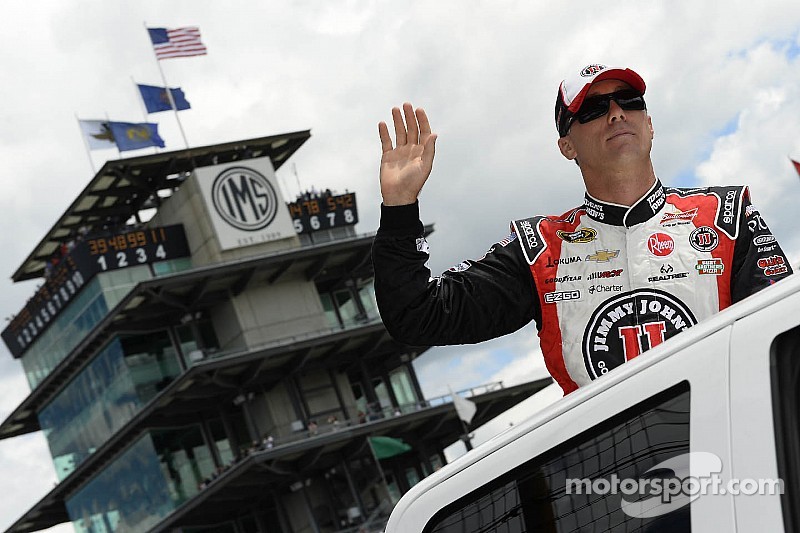 INDIANAPOLIS – It’s hardly a surprise when Chevrolets dominate time trials for the Brickyard 400.

And Saturday at Indianapolis Motor Speedway was no different.

Seven Chevy drivers advanced to the final round of qualifying with Kevin Harvick’s record-setting lap of 188.889 mph leading the way. For Harvick, it was his second pole at the Speedway - and his fourth pole in 2014.

Ironically, Harvick experienced a bit of anxiety prior to time trials.

“I was probably more nervous than I have been in a while for qualifying,” Harvick said. “I wasn’t really expecting to have the car run that fast.  From there they are all looking at you ‘alright if you screw this up it’s on you buddy’.

“It’s great to have fast cars. They do a great job preparing the cars and just being able to come to the race track and know the cars are going to be fast takes a huge burden off of everybody’s shoulders.”

I was probably more nervous than I have been in a while for qualifying,

In all, Hendrick engines powered six of the 12 drivers that advanced to the final round of qualifying and will line up within the first six rows for Sunday’s Brickyard 400.

Jeff Gordon will start from the front row as he hopes to win a record five 400s. His Hendrick teammate Jimmie Johnson, who starts 11th, is attempting the same feet. Starting 10th, Kasey Kahne is simply looking for his first win in 2014.

Harvick and his Stewart –Haas teammates Tony Stewart, Kurt Busch and Danica Patrick, who roll off sixth, seventh and 14th, respectively, had by far the best overall qualifying effort of any organization. Stewart said the results didn’t “surprise” him.

“Kevin with his team and all three of us had good runs,” said Stewart. “Kurt, with all the laps he got in here, I knew he would be good here.  Kevin has been good all year so not a surprise.

“Danica had a good run too she just missed it by a little bit to get in that final round.  The entire Stewart-Haas organization did a good job.  This is a big motor track so the Hendrick engines did a good job.”

But will any of Kevin Harvick’s SHR teammates or anyone else in the field for Sunday’s Brickyard 400 be able to take him down?

Here are five other drivers to watch:

1) Jeff Gordon - Gordon said he “didn’t have anything” for Harvick on Saturday, but that was during three qualifying rounds. Sunday’s race will be a whole new ballgame. Gordon and Bobby Labonte are the only drivers in the field that have competed in every NASCAR race at Indy. But Gordon has four wins, 11 top fives and 16 top 10 finishes. He leads the tour with 488 laps led and has just one DNF.

2) Jimmie Johnson – J.J. also has Hendrick power and four wins in 12 starts. While his average finish of 15.6 is nowhere close to Gordon’s 8.8 (second best on the tour), Johnson has won half of the last eight events at IMS and has led 302 laps.

3) Tony Stewart - Stewart is the only driver other than Gordon and Johnson with multiple wins at the track. He also holds the best average finish of 7.9. And the Indiana native has been consistent at his hometown track. He’s completed every lap raced in 15 starts and led 227 laps.

4) Brad Keselowski – Keselowski, who starts third, would love to break up this Chevy show and bring home a Brickyard 400 trophy for team owner Roger Penske. Despite winning a Sprint Cup championship already, he desperately wants a marquee win on his resume. The Penske cars have the power – all three entries will start in the top 10. Keselowski has the least experience in this group, but he’s led laps in three of his four Brickyard starts, completed every lap and posted two top 10 finishes.

5) Juan Pablo Montoya – Montoya is the wild card. He has nothing to lose. He’s not running for points – only the win to fulfill Roger Penske’s bucket list. Plus, Montoya is just damn good at the Brickyard. He had two solid chances to win in his seven years with Chip Ganassi and finished second in his first 400 start. He’s the only driver in the field who has won an Indy 500 which would make for a great story line on Sunday.