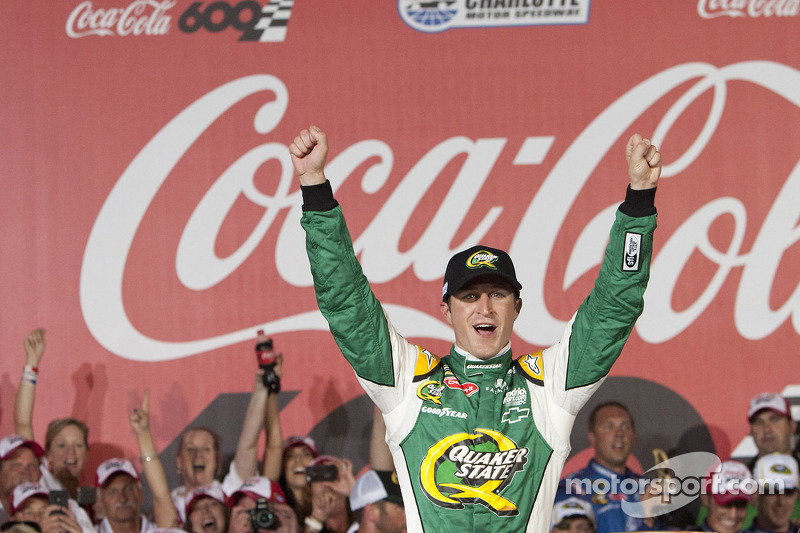 CONCORD, N.C. – It's easy to see the tide turn, but it's rare when you can hear that same tide turning, as well.

The wild – almost maniacal – cheers heard following Kasey Kahne's dominating win in Sunday's Coca-Cola 600 at Charlotte Motor Speedway were more than your run-of-the-mill hoots and hollers of joy and celebration.

Rather, it was an aural crescendo of affirmation that Kahne not only earned his first win for his new team, Hendrick Motorsports, but also that he may very well have taken the first step to finally becoming the race car driver and potential champion that so many people have touted since he came into the Cup series in 2004.

Now, to be at Hendrick Motorsports, is just a dream come true.

Wait, where have we heard that before? Oh yeah,

The same thing has been said about Dale Earnhardt Jr. since he also migrated to Hendrick Motorsports in 2008. But there's a huge difference between the offspring of the late Dale Earnhardt Sr. and the racing prodigy from Enumclaw, Wash., that has had the "can't miss" tag upon him now for nearly a decade.

And while Earnhardt may never win a Cup championship, now that he's with HMS, put it on your calendar that Kahne will win a Cup title within the next four years, possibly sooner.

No, I didn't hit my head, nor am I caught up in all the post-race hoopla. Kahne, to me, has been one of those drivers who have been in the wrong place at the wrong time for much of his career. When he was with Evernham Motorsports, which morphed into Evernham-Gillette Motorsports, then Gillette Motorsports, then Richard Petty Motorsports and finally Red Bull Racing at the tail end of last year, Kahne has always had the talent, but he's rarely had the kind of resources to support that talent like he now has at HMS.

His future now looks brighter than it ever has. And Sunday's win could be the kickoff to what will become many more wins and an eventual Sprint Cup championship or two.

When Kahne came into the CMS media center after the race, I started thinking about what might have been had he not elected to sign with team owner Ray Evernham at the end of 2003, replacing the legendary Bill Elliott in the No. 9 Dodge.

Many people have forgotten that when he signed with Evernham, Kahne was still under contract with Ford and Robert Yates Racing (for whom he raced the 2002 Busch Series season), which ultimately led to a lawsuit that resulted in Kahne eventually paying monetary damages to Ford to legally earn his release.

Kahne would go on to a less-than-stellar career with Evernham, et al, certainly not the kind of performance that so many people expected from him. Consider that from his debut in 2004 until last season, sure, Kahne became a great fan favorite, earned 12 wins and never lost the "can't miss" tag that he'd someday become the great driver that so many people predicted of him. 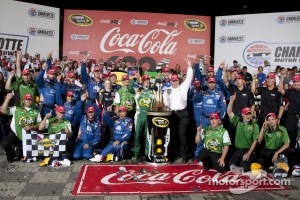 But the reality is in the numbers: Kahne came into the sport in the first year of the Chase for the Sprint Cup, yet has managed to make the 10-race playoff battle just twice in his first eight years, the last time coming in 2009.

By comparison, had Kahne remained with Ford and eventually segued to Jack Roush's organization (Roush had long coveted Kahne, who won Roush's "Gong Show" test for upcoming drivers in 2001) – and never sat behind the wheel of a Dodge or Toyota race car – one can't help but wonder how much more successful he would have been with an organization like the one Roush has built, one that is much closer to the superiority of HMS than to any of the Dodge or Toyota organizations Kahne ultimately raced for.

Had Ford and ultimately Roush managed to keep Kahne, think about what Roush drivers have achieved in the years since Kahne came to the Cup series:

• Matt Kenseth was coming off the last pre-Chase championship in 2003, and has gone on to make the Chase seven of the last eight seasons, not to mention winning the Daytona 500 twice in 2009 and at the start of this season. Also, 15 of his 22 career Cup wins have come since 2004.

• Carl Edwards also came into the Cup series in 2004 (albeit two-thirds of the way through the season, replacing Jeff Burton), but went on to win 19 races and make the Chase five of the following seven seasons. He also won Nationwide Series championship in 2007. Had Kahne still been with Ford, might he have replaced Burton instead of Edwards? You can't help but wonder about that, too, as well.

• Greg Biffle has won 16 of his 17 Cup races since Kahne came on to the Cup scene, and made the Chase in four out of eight tries.

• In Kahne's first three seasons, Mark Martin was wrapping up his lengthy tenure with Roush and made the Chase in each of those years.

The only driver in the Roush camp that failed to achieve success during the time Kahne has been in the Cup series was David Ragan.

Still, you can't help but wonder "what if?"

I asked Kahne about that very thing after his win and his response was somewhat surprising:

"Well, I was with Yates. Yates really didn't want anything to do with me. The whole thing to go to Evernham, I mean, that was the best opportunity I could have imagined. Ray took care of me, he taught me a lot (and) Bill Elliott helped me a ton that first season.

"Even with some of the turmoil and things that happened to me four or five years later, I wouldn't change any of that stuff. You grow and you learn. I think all that stuff was good for me. Now, to be at Hendrick Motorsports, is just a dream come true."

So now that the pride of the Pacific Northwest has finally earned his first win in Hendrick colors, there's a lot to reflect upon what he did Sunday.

In addition to earning his first Cup win since his triumph at Phoenix in the second-to-last race of last season, Sunday's victory also came in Kahne's 300th career Sprint Cup start.

And as if to add icing on the cake, he helped team owner Rick Hendrick start on his second 200 wins, giving Mr. H his 201st win (and second in a row, counting Jimmie Johnson's win at Darlington two weeks ago) Cup win as a team owner.

In a way, Kahne's win Sunday was more a culmination than a complete surprise. Sure, he started off the season terribly, with finishes of 29th, 34th, 19th, 37th, 14th and 38th in the first six races. But in his six most recent races, he's been one of NASCAR's most consistent drivers, having finished 7th, 8th, 5th, 4th, 8th and finally 1st on Sunday.

"We're gaining," Kahne said. "I think that's our seventh top-10 in a row, including the All-Star Race, so we're making great strides."

Forget the great strides, something tells me Sunday was the start of something that is going to be big, very big going forward, and the "can't miss" kid will finally live up to that nickname in a big way – just eight years late. 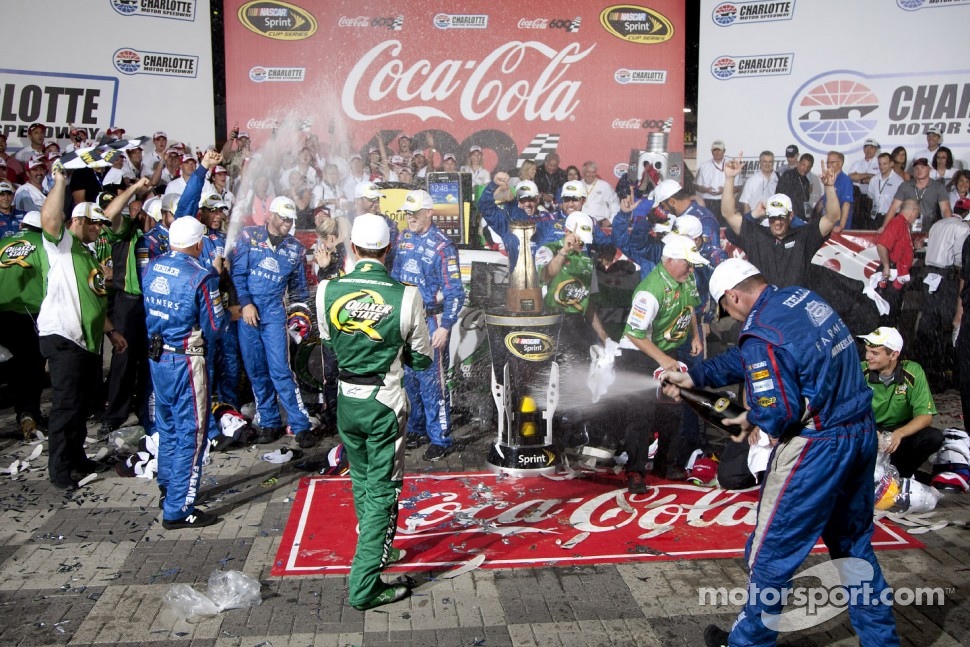