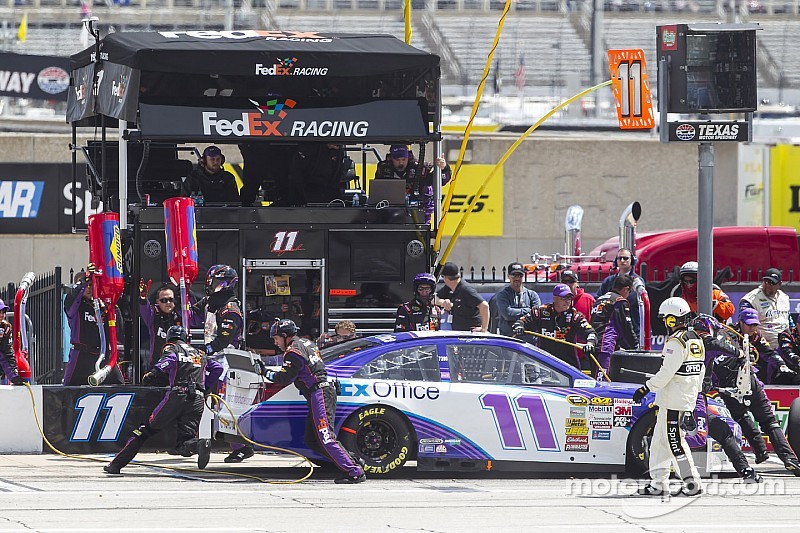 Hendrick Motorsports and Team Penske have dominated the NASCAR headlines in 2014.

Maybe that's about to change.

On Sunday night, the buzz beyond Tony Stewart’s return and Kevin Harvick’s dominant run from the pole was Joe Gibbs Racing’s tremendous effort on pit road.

It’s a great feeling when you come to pit road and you know you’re going to come out first pretty much every time.

“We really didn’t have the fastest car after halfway by any means,” said Denny Hamlin, who finished third and spent the least amount of time on pit road on Sunday. “We really overachieved with our pit stops – those guys kept me in it all day long and it’s a great feeling when you come to pit road and you know you’re going to come out first pretty much every time.

“If it wasn’t for our pit crew, it was a tough fight for us. But they did a good job, the whole team did today. A little disappointing, I thought we had a little better car than this and was pretty optimistic. Still, it puts us in position to win.”

Making the most of it

When it came to restarts, Hamlin and Kenseth spanked the field. Perhaps one of the reasons their dominance appeared so stark, was the Hendrick-powered cars ability to blow right by the Nos. 11 and 20 Toyotas after a couple of laps of green flag racing only to lose the lead on pit road - again.

It's almost impossible to beat them.

Matt Kenseth on the Hendrick-powered cars

“It's hard for one of those eight cars not to win every week,” Kenseth said of the four Hendrick Motorsports and four Stewart-Haas Racing teams which led a combined 242 of 335 laps. “They just got a ton of a ton of speed.

"They're hard to keep up with, on short runs like that when you have restarts and stuff like that, it's almost impossible to beat them."

Despite Harvick leading nearly four times as many laps as his closest competitor, the team cried foul during the race citing JGR’s air guns provided an advantage.

When crew chief Rodney Childers was asked by his friend and former driver Clay Rogers what was going on with the JGR air guns, he replied on Twitter:

Michael Lepp, Director of Athletics at JGR, weighed in:

A crewman with knowledge of the situation said Gibbs began working with the first prototype in 2009 and has made improvements over time. With the newest model, “the changer is only limited by his own ability – not the guns”.

And while the average pit squad executes 11 and 12-second stops, Gibbs squads' pit stops are now in the 10 to 11-second range.

“They are serious about gaining every edge they can get,” added the crewman.

Another pit coach who has reviewed Gibbs works says It's more than just an air gun. The men behind the machines are some – if not the best on pit road.

“Mike Hicks on the rear of the 11 (Hamlin) is a man amongst men,” said the pit coach. “He may be the best tire changer on pit road right now. Yes, they have the best package right now but they also have the best people that know how to operate the guns.”

Hicks got in on the Twitter fun as well:

All’s fair in love and racing

While the NASCAR rulebook states that only air guns approved by the sanctioning body can be used in competition, there is no specific approval process. “Only two half-inch air wrenches with single socket and a hex design capable of removing or attaching one lug nut at a time must be used to change tires during any pit stop,” reads the rule. Also, the socket cannot retain or disperse the lugnuts.

If a team has the resources to develop a device to improve performance, as long as the team follows the above rules, it’s game on.

And if the million dollar price tag seems steep, consider this: For finishing second on Sunday, Kenseth collected $264,741. While it’s uncertain what contingency programs are available to the No. 20 car, his teammate Hamlin earned $182,705 for placing third. With tens of thousands at stake for each positioned gained at the finish, the technology eventually pays for itself.

When Kenseth was asked after the race whether his teams had an advantage on pit road with the new air gun, he joked, if he knew, "I wouldn't tell you."

The former Sprint Cup champion summed up what the rest of the competition on pit road has known for some time: Inevitably, the team's success comes down to its people.

“Our pit crew's been doing a really good job,” Kenseth said. “JGR has a pretty impressive program when it comes to training pit crews and coaching them and doing all that stuff as you would expect.  So the guys are really doing a good job.”