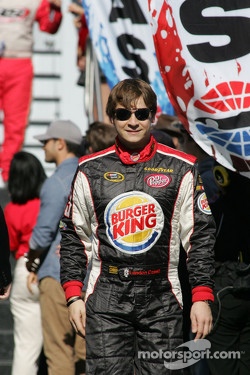 Statesville, N.C. - This week's race at Homestead-Miami Speedway is important to Landon Cassill, driver of the No 83 Burger King/Dr Pepper Toyota, for more reasons than one.

With Burger King's headquarters located in Miami, Fla., Cassill hopes to pilot his sponsor's logos to the front of the pack at the 1.5-mile oval. He also hopes this weekend's performance is the final stamp on a solid year and sets the tone for a productive off season.

Cassill has made two Cup Series starts at Homestead. His best finish is 36th, which came last season.

"This is a really important race to us for a few reasons. Of course it's the season finale and we want to end the year on a good note.

We want to close out 2012 with a solid performance and go into the off season with as much momentum as we possibly can.

Another reason that Homestead is so important to us is because Burger King's headquarters is right down the road. We want to definitely put on a show for them and make them proud.

"Homestead is a fun place. It's really unique and unlike anywhere else we go. It's the championship weekend. I'm excited about going down there, having a good run and seeing who wins the title.

"It's hard to believe how quickly this season went by. BK Racing has come a long way since February. Most importantly, we've just come together as a team.

We've gradually eliminated a lot of the mistakes that we used to make earlier in the season. This weekend is a chance for us to prove what we're capable of one last time, finish strong and start preparing for 2013.

"I'm really excited about the off season. I'm looking forward to getting married in December. Running the Snowball Derby will be a lot of fun, too. I've got a lot to be excited about."