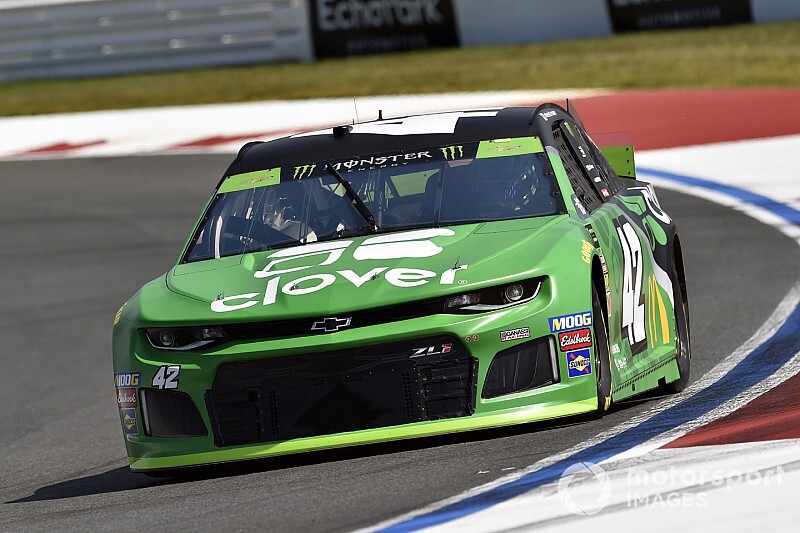 A late-stage caution cemented a surprise win for Kyle Larson in the first stage of Sunday’s Bank of America 400 at the Charlotte Roval.

Larson got around Byron through Turn 1 on a restart on Lap 23 of 25 as the field wrecked behind them and a caution was displayed.

Erik Jones, who was last in the playoff standings entering the race, was involved in the wreck and had to take his No. 20 Toyota to the garage, his race and playoff run ending early.

Byron, who started on the pole, led the first lap but Alex Bowman spun coming to the backstretch chicane and Martin Truex Jr. drove through it.

Truex served a penalty on the frontstretch for missing the chicane while Bowman pit under green for four new tires. Bowman dropped to 40th in the running order.

After a review, NASCAR determined both Bubba Wallace and Bowman also had to serve stop-and-go penalties for missing the backstretch chicane on the first lap.

After five laps, Byron had built a 2.4-second lead over Jimmie Johnson with Logano running in third.

On Lap 8, Truex again missed the backstretch chicane and had to serve a stop-and-go penalty.

With 15 laps remaining in the first stage, Byron’s lead had expanded to 4.8 seconds over Johnson. Logano was third, Kevin Harvick fourth and Bowyer fifth.

On Lap 14, Larson moved into the top-five after getting around Bowyer. Harvick grabbed third from Logano at the entrance to the front chicane.

With 10 laps to go, Byron’s lead had ballooned to 5.7 seconds over Johnson with Harvick in third, 7 seconds behind the leader.

Harvick out-braked Johnson entering the back chicane on Lap 18 to grab the runner-up position and about 7 seconds behind Byron.

On Lap 20, Ryan Preece spun out in the middle of the back chicane to bring out the first caution of the race. Several drivers elected to pit but Byron remained on the track and in the lead.

When the race returned to green on Lap 23, Byron was followed by Larson, Logano, Bowyer and Blaney.

Kurt Busch got into the back of Chris Buescher on the restart which triggered a multi-car wreck to put the race back under caution. Johnson, Jones, Bowman and Denny Hamlin were among the others involved.

Larson got around Byron just before the caution was displayed to take the lead and the race did not restart before the end of the stage.