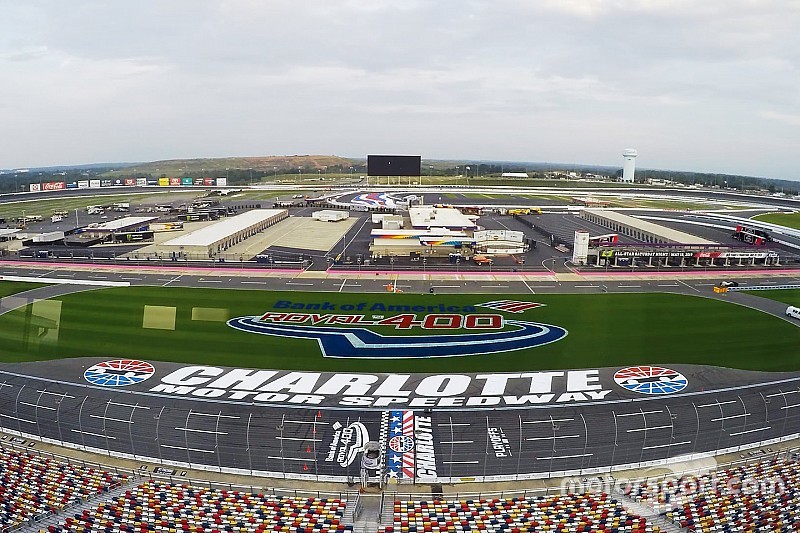 At least in its track preparation work, the group preparing for the debut of the Roval course at Charlotte Motor Speedway has added an international flare.

This week, the final touches were completed by RoadGrip, a team of British track surface painters, who painted the course.

Fans are likely to see an array of Grand Prix-style visuals when cars first take the course on Thursday for a pair of Xfinity Series practice sessions on the 2.28-mile, 17-turn course.

In addition, Mycroft Signs added ornate, patriotic paint designs to the speedway’s walls as well as painting track signage and the synthetic turf in the speedway’s infield.

The course will host its first NASCAR races this weekend – an Xfinity Series event on Saturday and a Cup Series race on Sunday.

“We’re going to bring a flavor of the Formula 1 circuits to the Roval,” said RoadGrip contract director Hugh Blackburn, whose team regularly paints F1 courses all over the world.

“We'll put some edge lines in, some color and we’ll break up the massive asphalt with some branding and longitudinal striking to give it some continuity from the oval to the road course. Hopefully, that color and that variety will engage the fans in a different way

“It’ll certainly give a bit more to the fans.”

Mycroft Signs, RoadGrip and speedway operations staff used 5,400 gallons of paint in the project – which saw the yellow walls change color for the first time in a decade, through the use of Pioneer Athletics paint, a temporary and removable paint product also used at the Super Bowl.

Sunday’s Bank of America 400 Cup race will serve as the conclusion of Round 1 of that series’ playoffs, with the four drivers lowest in points (among 16 current contenders) being eliminated from further title contention following the event.

Saturday’s Drive for the Cure 200 serves as the second race of the first Round 1 of the Xfinity Series playoffs.

If on his way out of playoffs, Jimmie Johnson will "go down swinging"

A.J. Allmendinger out at JTG Daugherty Racing after 2018 season