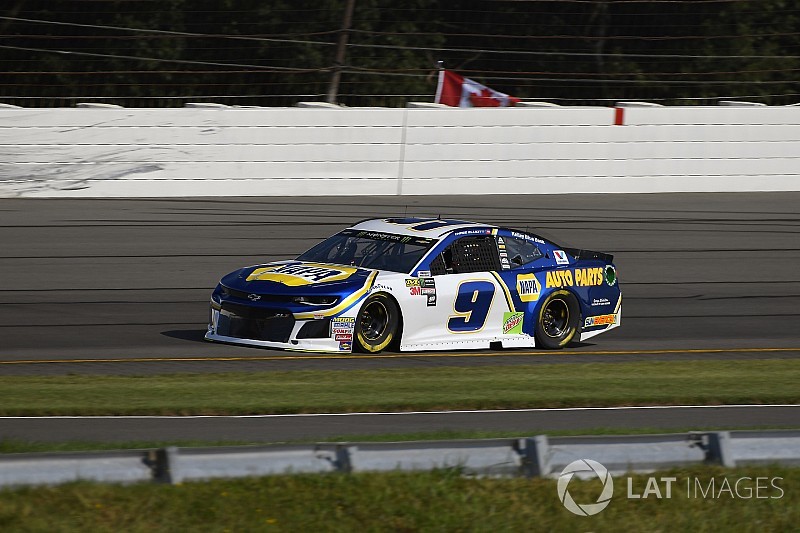 Chase Elliott cruised to the Stage 1 victory over Kevin Harvick at Pocono Raceway, just his second stage win of the 2018 season.

Suarez, who started on the pole, took early control of the race after five laps had moved out to an almost one second lead over Hamlin.

Nine laps into the race, Harvick – who had won the pole but had his qualifying speed disallowed after his car failed inspection – had already worked his way into the Top 10 from the back of the field.

With 30 laps remaining in the stage, Harvick elected to short pit and headed down pit road to make their stop for fuel and tires. Bowyer and Bowman followed him down shortly thereafter.

Suarez and Hamlin both hit pit road with 28 laps to go as most of the rest of the field began making their one stop they need before the end of the stage.

Jamie McMurray, Matt Kenseth and David Ragan were all penalized for speeding on pit road during their respective stops and had to make a pass-thru penalty.

Once the cycle of green-flag pit stops were completed with 16 laps remaining in the stage, Hamlin had gotten around Suarez to take the lead for the first time.

With 15 laps left in the stage, Hamlin had almost a second lead over Elliott as Suarez fell back to third.

Elliott went inside of Hamlin in Turn 1 and took the lead for the first time with 11 laps left in the stage.

On Lap 43, Harvick moved into the third position behind Hamlin as Suarez dropped to fourth.

With five laps left in the stage, Elliott had moved out to a more three-second lead over Harvick, who had taken the second position from Hamlin.

Just before the conclusion of the stage, Erik Jones and Martin Truex Jr. elected to pit, hoping to gain track position after the stage break.

Before the start of the race, the cars of Kasey Kahne (engine change), Ross Chastain (driver change) and J.J. Yeley (unapproved adjustments) had to drop to the rear of the field.