Chase Elliott is ready for his Cup coming out party 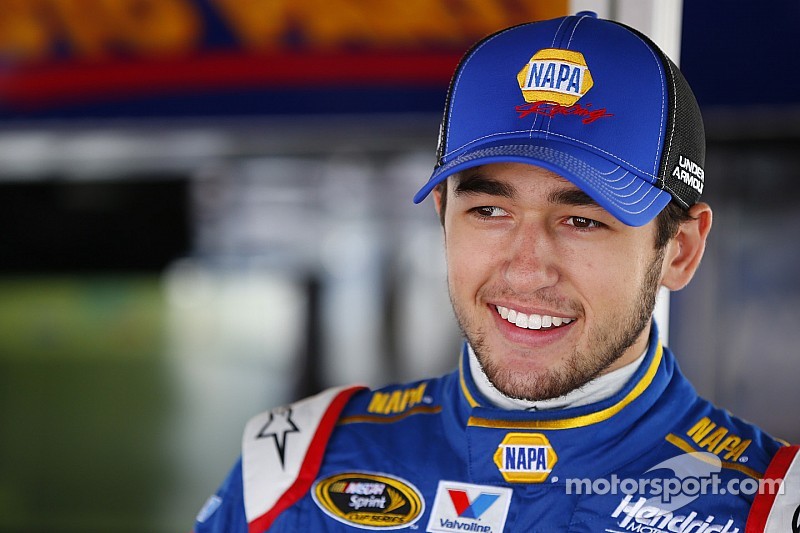 Second-generation racer is not nervous about Martinsville debut

MARTINSVILLE, Va. – Chase Elliott was disappointed after qualifying 27th for the STP 500 at Martinsville Speedway.

The 19-year-old second-generation racer had difficulty accepting that “just a couple of hundredths” of a second on his lap would have propelled into the top 24 fastest drivers and the opportunity to compete in the second round of knockout qualifying on Friday.

But it’s that desire to improve that has elevated Elliott so quickly up the ladder to his first XFINITY Series title as a rookie in just his fourth season rising through the NASCAR ranks.

And his determination has paid off. On Sunday, Elliott will make his first career start in the Sprint Cup Series in the No. 25 NAPA Chevy among stock car racing’s elite.

You just want to put together 500 solid laps on Sunday and try to run all the laps and hope we can have a good day.

“We’re excited and looking forward to the race,” Elliott said. “Obviously, we want to go as fast as we can for as long as possible. So, no, we don’t want to aim to not run well, but we want to do the best we can and make the most of these races and try to just gain as much knowledge as possible.

“To have an opportunity to go run five races doesn’t seem like a lot, but at the end of the day it really is, if you can get in all five, and make those laps. You’ve got to take it one at a time, first off. You just want to put together 500 solid laps on Sunday and try to run all the laps and hope we can have a good day.”

The son of NASCAR champion Bill Elliott honed his skills at an early age on pavement and dirt. He won in the K&N Pro Series at 16 in his second season, earned a pole at Bristol in his fifth truck start and won at Canadian Tire Motorsports Park in his next race. In that same 2013 season, Elliott won an ARCA race at Pocono in his seventh start on that tour.

The following year, Elliott balanced his freshman year in NXS with his senior year in high school. In just his sixth start for JR Motorsports, Elliott won at Texas Motor Speedway. But what was probably more impressive was winning the following week at Darlington Raceway – known as “The Track too Tough to Tame”. Elliott collected a third victory at Chicagoland Speedway on his way to becoming the youngest series champion.

His XFINITY Series boss Dale Earnhardt Jr., who is also Elliott’s Hendrick Motorsports teammate, understands the advantage of growing up in the sport. Earnhardt believes the benefit of driving solid equipment throughout his career it has expedited Elliott's learning curve.

He is not running into a lot of things that are surprises to him.  He knows exactly what is coming around every corner, outside the car as much as inside the car.

“He has been good in several types” of cars driving several styles, different horsepower to weight ratios, different tires and track surfaces,” Earnhardt said. “He has been an observer of the sport for a really long time as a kid going to these races so I think he understands a lot about the sport.  He is not running into a lot of things that are surprises to him.  He knows exactly what is coming around every corner, outside the car as much as inside the car.

“I think that is why he really doesn’t get shook up all that well.  He kind of sees all this stuff coming.  I don’t know he is just a good little driver.  He puts great corners together and does a good job behind the wheel.”

In Happy Hour, Elliott was 27th on the speed chart and posted the 24th time for best consecutive 10 lap run.

Despite Elliott moving up to NASCAR’s top division so quickly, Earnhardt doesn’t anticipate the racer will be “very nervous at all” when he takes the green flag on Sunday.

“I know he’s excited about the opportunity to race,” Earnhardt said. “Every opportunity he can, he goes and races something like Late Model or what have you. So, he probably looks at this as just a trip to the Snowball Derby or something like that when he’s not running his Xfinity car. So, I think he’s probably pretty relaxed.”

Elliott agreed. He acknowledged that the only “pressure I felt was what I put on myself”.

“But, I always do my best to try to get in and that was our main goal today. So, there’s certainly a lot of pressure off to not worry about that tomorrow, and we can focus on our race car for Sunday afternoon.”