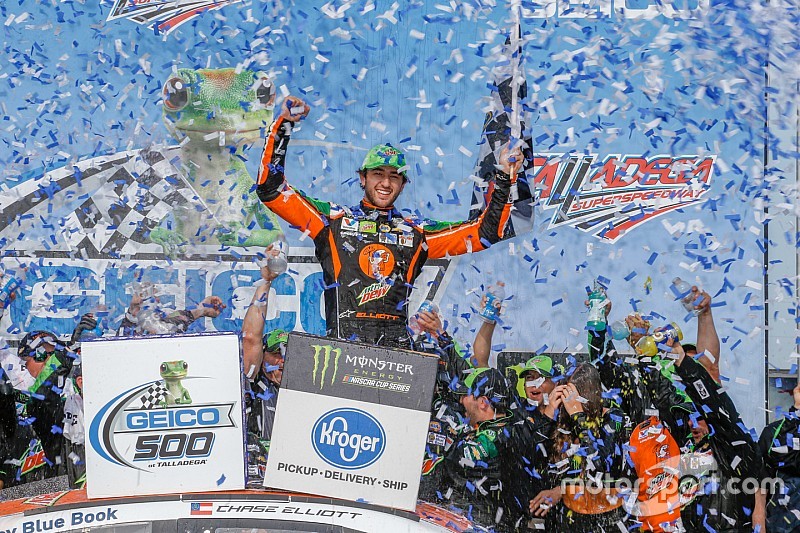 Elliott was working furiously to protect his lead on the last of 188 laps, when a wreck involving Kyle Larson, Jeffrey Earnhardt, David Ragan and others brought out a caution.

The caution froze the field and ensured Elliott’s victory – his first of the season and fourth of his career.

"What a day. A huge thanks to all my partners, my team, Hendrick Motorsports, Chevrolet  - there was a lot of teamwork done today," Elliott said. "You guys up there (Elliott pointed to the crowd), you're the ones that really make it happen.

"We just had a plan and we executed really well. Obviously, it could have gone either way but fortunately everybody stayed together and stayed the course and we got a little help on the last lap with the caution.

"I appreciate all the support, man. This is special. This is close to home for me and sort of feels like a home race."

Following the break between Stages 2 and 3, all of the lead-lap cars elected to pit with Elliott the first off pit road.

On the restart on Lap 117, Elliott led the way followed by Bowman, Larson, Kyle Busch and Austin Dillon.

Austin Dillon reported he may have a tire going down on Lap 125 while he was running in the sixth position.

With 60 laps remaining in the race, Elliott continued to remain out front followed by Bowman, Larson, William Byron and Kurt Busch.

A caution for debris was displayed on Lap 132 for debris on the backstretch. All of the lead-lap cars elected to pit for tires and fuel with Erik Jones the first off pit road.

With 47 laps to go, Logano, with a push from Ricky Stenhouse Jr., got around Jones to retake the lead with a pair of Toyotas behind him.

On Lap 144, Martin Truex Jr., with some help from David Ragan, powered to the front.

With 40 to go, Truex continued to lead the way followed by Ragan and Daniel Suarez.

On Lap 152, Logano moved back into the lead as Earnhardt powered into the top-10.

A final round of green-flag pit stops began on Lap 155 as a large group of Chevrolets elected to make their final stop for fuel in the race.

Brad Keselowski spun on pit road while the Fords made their group stop the following lap. His team completed his pit stop with his No. 2 Ford pointed in the wrong direction.

With 30 laps remaining, Ross Chastain led the way but still had to make a final pit stop in the race. Logano was second and Stenhouse third.

Chastain finally pit on Lap 165, which put Stenhouse back into the top spot followed by Logano and Kyle Busch.

With 21 laps to go, Logano drove around Stenhouse and reclaimed the lead.

With 15 to go, Logano worked feverishly to block and protect his position out front. One lap later, Kyle Busch powered to the point.

Logano returned to the point with 13 laps to go as Ryan Blaney moved into second.

On Lap 182, Matt DiBenedetto, Chris Buescher, Martin Truex Jr. and Justin Haley were involved in a violent wreck on the backstretch, started with Almirola got into Buescher. Buescher’s car briefly got airborne.

A red flag was displayed to clean the track of debris. When the race returned to caution, several cars from 10th on back elected to pit.

The race returned to green with four laps remaining and Logano in the lead, followed by Kyle Busch, Stenhouse, Kurt Busch and Elliott.

With three laps to go, Elliott moved into the lead.

Bowman says he could have challenged Elliott without caution